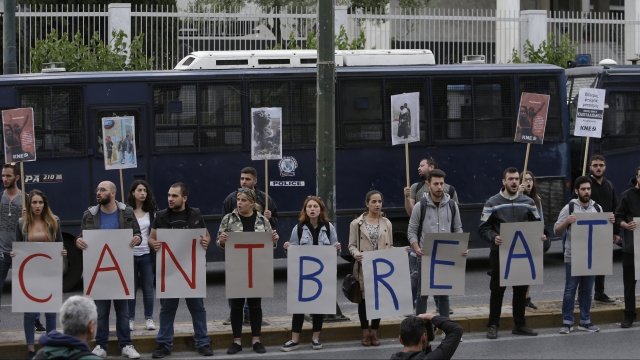 SMS
U.S. Adversaries Seize On Turmoil From George Floyd Protests
By Sasha Ingber
By Sasha Ingber
June 1, 2020
China, Russia and Iran have all weighed in on the U.S. unrest, from denying involvement to comparing the demonstrations to protests in Hong Kong.
SHOW TRANSCRIPT

Solidarity protests have taken place around the world in the wake of George Floyd’s death, but U.S. adversaries have seized on the chaos that has rocked the country.

Security experts say Russia sees the demonstrations as a chance to exploit fractures in society, as it has for years in the past.

"If they haven't been involved to date, I have no doubt that they will get involved here in the immediate future, in part because this is exactly what Russia did during the 2016 elections," says. Jamil Jaffer, Founder and Executive Director of the National Security Institute at George Mason University

"Based on my experience, this is right out of the Russian playbook as well," Susan Rice, a former national security adviser to President Barack Obama, told CNN.

A Kremlin spokesperson denies involvement in the protests, saying, "We have never meddled in U.S. affairs and we are not going to interfere now."

But Moscow is reinforcing President Donald Trump’s blame of the radical left and certain Democrats. Citing a Russian professor, the state news agency says the protests will bolster far-left groups inside the Democratic Party.

In Beijing, the government says it condemns “all forms of racial discrimination.” But China’s foreign ministry spokesperson also used the unrest to hit back at the U.S. for supporting protests in Hong Kong — invoking the last words of George Floyd next to a State Department message on Hong Kong.

In an official Communist Party newspaper, an opinion piece said, “US politicians should do their jobs and help solve problems in the US, instead of trying to create new problems and troubles in other countries.”

"China has a terrible history with racism and particularly around the coronavirus, Africans and African Americans in China were discriminated against," says Samm Sacks, a Cybersecurity Policy and China Digital Economy Fellow at New America. "I think that the reason you're seeing so much media coverage of the protests raging across the United States right now in Chinese media has very little to do with China's interest in racial justice or George Floyd. It's about how does a government respond to a protest movement when there are systemic issues related to rights, related to rule of law, related to injustices."

"Interestingly enough, it’s happening much in the same way that we’ve watched occur most recently in places like in Hong Kong, where protesters took to the streets," an RT anchor said.

"The Chinese and the Russians, they want to see more of this. Right. This plays into their ability, say, look, America's just like us. They crack down on protesters, too. They treat their people poorly. That is not correct. ... We have a system of law and order and it works with judges that have life tenure," says Jaffir.