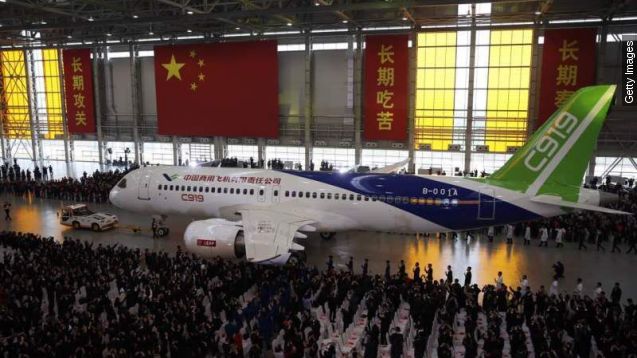 SMS
China Rolls Out Its First-Ever Large Passenger Plane
By Mari Jo Valero
By Mari Jo Valero
November 2, 2015
The completion of the airliner is a big step in China's plan to become a major aircraft manufacturer.
SHOW TRANSCRIPT

The chairman of China's state-backed aerospace manufacturer COMAC called the unveiling of the jet a "significant milestone." It's a big step in China's plan to become a major aircraft manufacturer that will eventually compete with Boeing and Airbus. (Video via CCTV)

Although the plane was made in China, foreign firms are supplying some parts of the jet, mostly its technology.

COMAC has also been in talks with Russian manufacturers to further develop the project and become more competitive. (Video via COMAC)

Bloomberg reports the head of China's civil aviation administration said, "The air transportation industry of China cannot completely rely on imports. … A great nation must have its own large commercial aircraft."

The communist country is also developing private jets. The first few models have already been delivered, but COMAC is still waiting on a U.S. safety certificate.

China's dream of building local civil aircraft goes back to the 1970s when leader Mao Zedong's wife backed an attempt to build up the country's aerospace manufacturing. The project eventually failed, and only three planes were ever made. (Video via A&E)