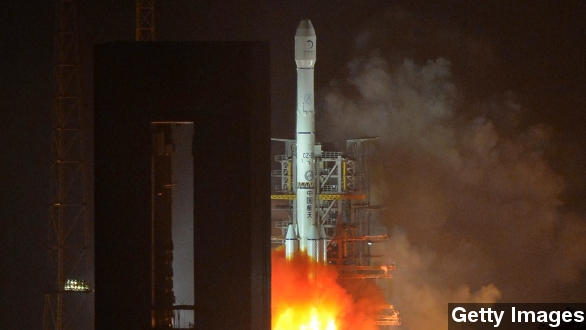 By Evan Thomas
October 23, 2014
The mission is China's next step toward automated sample-return missions and eventual manned missions to the moon.
SHOW TRANSCRIPT

China is headed back to the moon: state newspaper Xinhua confirms China is preparing an unmanned moon mission for launch later this week.

It’s sending a spacecraft to orbit the moon, return to Earth and reenter the atmosphere — the first such round trip attempted by the nation’s space program.

This week’s mission will confirm China’s spacecraft can land back on Earth in the right place at the right speed. It’s an important test run for another unmanned mission planned for 2017, which will retrieve and return samples of the lunar surface to Earth.

This will also be China’s fourth mission to the moon as part of a program leading up to manned missions. In December 2013, China launched a rocket carrying a lunar rover called Jade Rabbit. (Video via Sky News)

It was intended to run experiments for three months, but Jade Rabbit suffered mechanical trouble in January 2014. Reports in state media declared it dead on the surface of the moon. (Video via BBC)

By eventually progressing to returning Lunar samples to Earth, New Scientist says China will be “following a path blazed by other major spacefaring nations.”

U.S. astronauts returned samples during Apollo missions, and the Soviet Union ran automated missions to bring back moon rocks in the '70s.

CNN quotes a senior fellow at the Center for Strategic and International Studies who says China’s space program has yet to reach the scientific or military significance of U.S. or former Soviet programs, but it’s a great public confidence tool.

“For the domestic audience that is the chief concern of China's leaders, the space program produces invaluable results."

The Lunar orbit mission is expected to last about a week and will touch down somewhere in Mongolia.