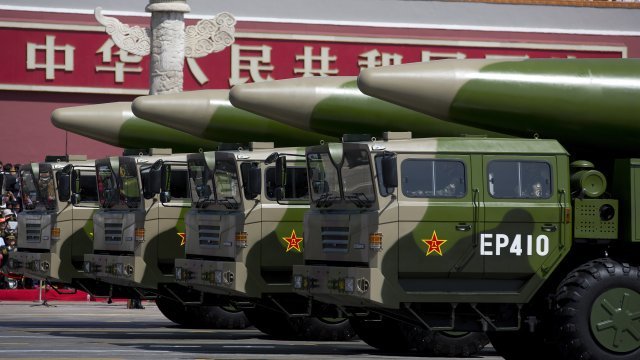 By Matt Picht
October 24, 2018
China's buildup of intermediate-range missiles might have helped spur the U.S. to signal an exit from an arms control treaty with Russia.
SHOW TRANSCRIPT

The U.S. and Russia are butting heads over President Trump's plan to scrap a Cold-War-era arms control treaty. But the treaty's potential demise might have more to do with a third nation: China.

The Intermediate-Range Nuclear Forces Treaty was signed in 1987 by the U.S. and the Soviet Union. Thanks to the deal, the U.S. and Russia can't field any ground-based missile systems that could strike targets between 310 to 3,400 miles away.

China isn't bound by that treaty, and the country has been building up its intermediate-range missile capability, in part to ward off any U.S. incursions on what China views as its home turf.

Tong Zhao, a fellow at the Carnegie-Tsinghua Center for Global Policy, told Newsy, "So basically, China can use precision-guided missiles to attack or threaten important US military targets in this region, including US ships that can sail close to China's coast. ... Increasingly, they can threaten a wide range of US military targets, as well as a wide range of American allied targets – Japan, South Korea and even Australia or other Southeast Asia country. I think the US feels increasingly uncomfortable."

The U.S. does have options to respond to China: the INF doesn't cover sea- or air-based missile systems. But those platforms can often be more costly to field than a ground-based missile launcher of the sort prohibited by the INF. 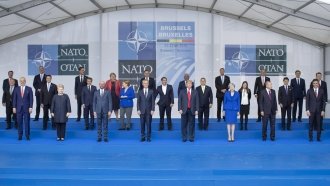 But even if the U.S. walks away from the treaty, it'll still need to find a safe place in the region to put its new missile systems. That's easier said than done.

Zhao said, "If the US wants to deploy land-based missiles in allied territories such as Japan and Australia, it's not certain that these countries would welcome such deployments, because hosting these American missiles will make them targets of Chinese military attack."

It's worth noting that Russia shares a lot of similar concerns with the U.S. about China's missile buildup. It's possible that Trump's moves to pull out of the INF could prompt a broader renegotiation of the deal that includes China's capabilities.

But it's also likely China and Russia will respond to this move by stepping up their own weapons programs — which could lead to a new arms race in the region.