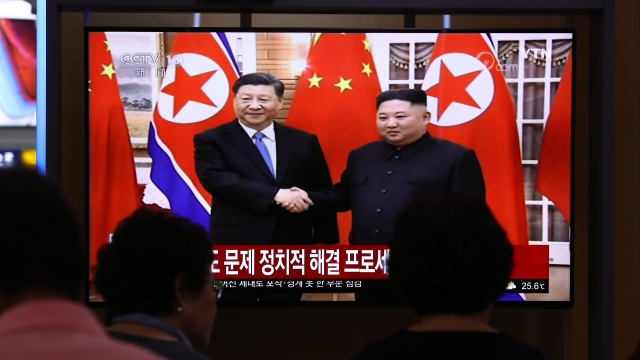 SMS
China's Xi Jinping Visits North Korea With Eye On A Shared Rival: U.S.
By Peter Hecht
By Peter Hecht
June 20, 2019
The summit between a global economic power and a country with the 134th-ranked economy may be a pursuit of negotiating leverage with President Trump.
SHOW TRANSCRIPT

Chinese President Xi Jinping headed to North Korea on Thursday. His two-day state visit is expected to reinforce ties between the Pyongyang government and its principle trading partner - while also sending a message to a shared rival, the United States.

The summit between leaders of a global economic power and a country with the 134th-ranked economy is shaping up as a shared pursuit of negotiating leverage with the U.S.

It comes as China finds itself in a trade war over President Trump imposing $200 billion in tariffs on Chinese goods while threatening another $300 billion in tariffs. Simultaneously, talks between the United States and North Korea over denuclearization have broken down, after a second summit ended without a deal.

A Chinese scholar specializing in North Korea says the talks can help China on two global fronts because “President Xi’s visit highlights the crucial role that China plays in resolving the Korean Peninsula nuclear issue...given the lack of trust between North Korea and the U.S. right now.”

Xi will meet Trump next week at the G-20 summit in Japan. He can potentially arrive with enhanced clout if he brings positive news on North Korea.

Kim Jong Un needs economic relief for his country. And China has been North Korea's lifeline.