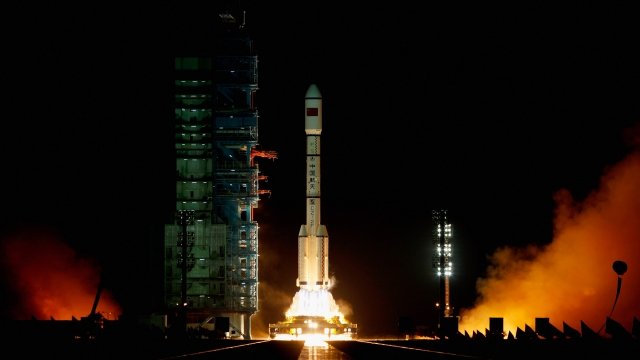 SMS
2 Nations Are Vying To Be The New Heavyweights Of Space Exploration
By Tyler Adkisson
By Tyler Adkisson
June 23, 2017
The U.S. and Russia are longtime power players in space exploration, but two nations in Asia have made big strides to improve their programs.
SHOW TRANSCRIPT

Power players of space exploration are relatively few and far between, but the list is growing. India and China are making strides to keep up with and even surpass mature programs like those in the U.S. and Russia.

India recently sent 31 satellites from 15 different countries into orbit. And in early 2017, it sent 104 satellites into orbit at once — the most ever for a single rocket. It surpassed the previous record of 37 set by Russia in 2014.

China is set to send an unmanned probe to the moon to bring back the first soil samples in more than 40 years. By 2018, it's expected to be the first country to soft-land a probe on the far side of the moon.

India and China are also two of six space agencies in the "heavy-lift" rocket club. China joined at the end of 2016, and in June, India successfully launched a satellite into orbit that's several tons and 13 stories tall.

And it doesn't look like they're ready to slow down, either. In the next five years, India plans to send 25 rockets into space and spend $6 billion on its space program.

Meanwhile, China is set to build its own space station. Construction will start in 2019, and it's expected to be done by 2022. That's two years ahead of the possible retirement of the International Space Station.