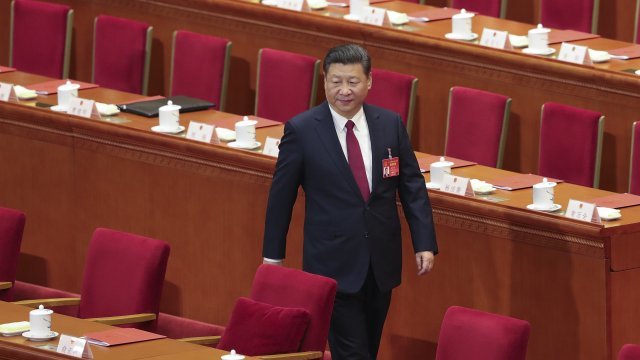 Experts say President Xi Jinping almost assuredly will be given a second term.

At China's 19th Communist Party congress, President Xi Jinping is expected to receive a second term and further tighten his grip on the party's reins.

Held once every five years, the party congress is a week of political pageantry in which grand decisions — which some say are really made ahead of time by party elders — are unveiled and rubber-stamped by the roughly 2,300 delegates.

But this year's congress could differ from those before. It's unclear whether or not Xi will promote a protégé to become his eventual successor. Currently, China's constitution only allows a president to serve two five-year terms, and an unofficial rule dictates that party leaders step down at the party congress following their 68th birthdays.

Xi is 64. By the time the next party congress takes place, he'll have aged out. But analysts think Xi could set his own precedent at this congress by allowing one of his closest allies, 69-year-old Wang Qishan, to remain on the party's top decision-making body, the Politburo Standing Committee.

In addition to advancing ways to improve the country's economy, Xi will likely outline steps to further establish China as a global power player.

In the face of U.S. President Donald Trump's "America First" nationalism, Xi has turned China toward globalism. Under Trump's watch, China has taken the initiative in fighting climate change and embarked on the grand "Belt and Road Initiative" to connect dozens of countries with trade routes.

North Korea's deputy ambassador to the U.N. said the situation in his country has "reached the touch-and-go point."

Xi has also been a crucial player in the international response to North Korea's nuclear weapons program.

The country has a history of scheduling missile launches during important events in China, and Xi's backing of recent U.N. sanctions against North Korea could incite the country.

The party congress began Wednesday with Xi's opening speech and is expected to last a week. Introductions for the next round of leaders will likely happen next Wednesday.