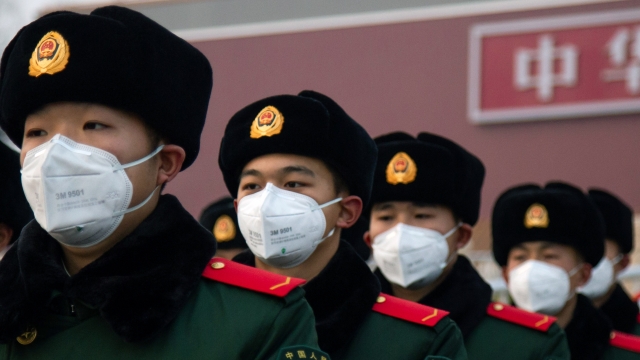 On Monday, China extended its Lunar New Year holiday in an effort to control the deadly coronavirus outbreak. Other Asian countries are also increasing efforts to limit the spread of the virus.

The Lunar New Year was originally supposed to end Jan. 30, but as the coronavirus outbreak grows, China decided to push back the end date to Feb. 2.

In a statement, the General Office of the State Council said the decision is meant to "reduce mass gatherings, block the spread of the epidemic, and to better safeguard the safety and health of the Chinese people."

The city of Shanghai has also announced that certain nonessential businesses in the city would be closed until Feb. 9.

The coronavirus outbreak is believed to have originated in Wuhan. It's killed more than 80 people and sickened more than 2,800 others in China alone. The U.S., Thailand, Australia, France and Canada, among others, have all confirmed cases on their soil.

Mongolia, which neighbors China, is closing its border to reduce the possibility of spreading the virus. Malaysia and Hong Kong are also barring entry for most people from Hubei province, where the outbreak reportedly began.

On Sunday, the World Health Organization's director general, Tedros Adhanom Ghebreyesus, said in a tweet he was on his way to Beijing to meet with government and health officials. He said, "My @WHO colleagues & I would like to understand the latest developments & strengthen our partnership with [China] in providing further protection against the outbreak."