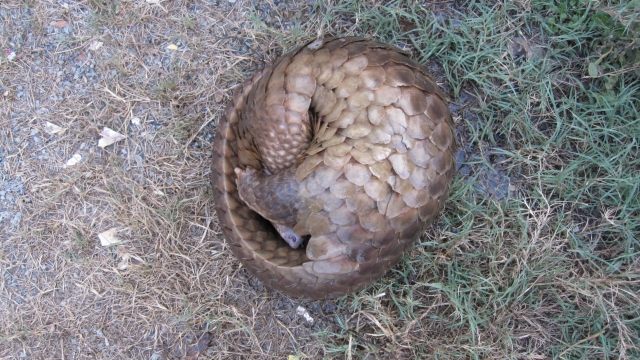 Chinese officials announced they've made the largest bust of the world's most trafficked mammal, the pangolin.

Chinese media reported more than three tons of pangolin scales were seized at a Shanghai port. Authorities estimate more than 5,000 animals had been killed.

Three suspects were arrested in connection with the bust. Authorities said the crates used to smuggle the scales were registered in Africa. The suspects could face more than a decade in prison.

If you're not quite sure what a pangolin is, you're not alone. The scaly little mammals aren't really well known.

Pangolins tend to curl into a ball when threatened. Their scales make them basically impervious to predators in the wild, but they're easy targets for people.

In some parts of Asia, pangolins are prized for their meat, and their scales are often used in traditional medicine. That's why all eight species are being hunted to the brink of extinction.

The pangolin's plight has gotten more attention recently, and it's currently under the highest level of international protection an animal can receive.

But saving the pangolin population is tough because scientists don't have a good estimate of how many are left in the wild.