China And Russia Are Reportedly Spying On Trump's Phone Calls 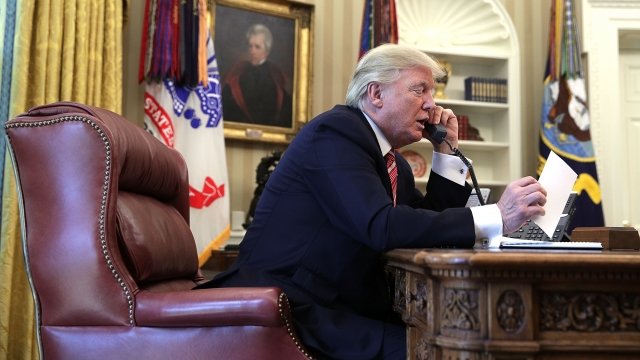 By Katherine Biek
October 25, 2018
The New York Times says China is trying to use information from the president's calls to help in its trade dispute with the U.S.
SHOW TRANSCRIPT

Chinese and Russian spies are reportedly listening in on some of President Donald Trump's phone calls.

That's according to The New York Times, which reports U.S. officials were made aware of the intercepted calls from people working within foreign governments.

The Times' sources said China is trying to use information from the president's calls to help in its trade dispute with the U.S. The country is also reportedly using businessmen to pass along the Chinese government's views to people President Trump talks to regularly, in the hopes they will then relay that information back to him.

Newsy previously reported that President Trump prefers to use his cellphone in some situations instead of a more secure line. But experts say even a government-issued cell phone poses a security risk as hackers could gain access to private information or eavesdrop on calls.

As for Russia spying on the president's calls — the Times said that country isn't keeping an ear out for any specific information to use to sway the U.S. leader since he already has a close relationship with Russian President Vladimir Putin.