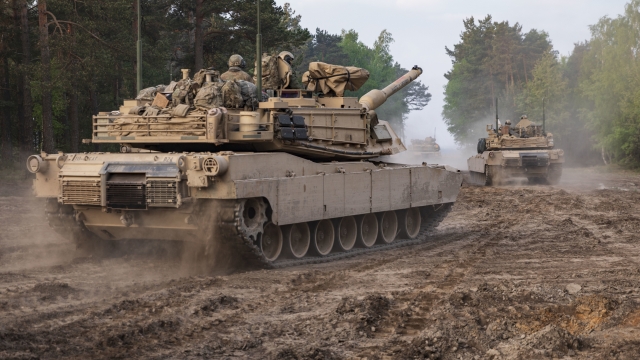 A spokesman for China's Foreign Ministry accused the U.S. on Monday of "seriously [violating] international law" by selling weapons to Taiwan.

His comments came several days after China announced it would impose sanctions against U.S. companies involved in the arms sales.

It's retaliation against the U.S. State Department approving a potential $2.2 billion arms sale to Taiwan. It's slated to purchase 108 M1A2T Abrams tanks, 250 Stinger missiles and other related equipment.

Taiwan broke away from China in 1949 and has been under its own democratically elected government ever since. But China, under the "One China" policy, views Taiwan as part of its territory. Beijing has said it's willing to use force to regain control of the island if necessary.

The U.S. formally considers Taiwan's status as unsettled, though it has acknowledged the "One China" policy since 1979. That same year, the U.S. also passed the Taiwan Relations Act, which allows the U.S. to sell arms to the island for defense.

It's important to note that the U.S. has been selling arms to Taiwan for years. In fact, from 2000-2017 it approved more than $25 billion in "major arms sales" proposals to Taiwan, according to the most recent report from the Congressional Research Service.

China's previously threatened to issue similar sanctions against U.S. defense contractors in both 2010 and 2015. It's unclear if those sanctions were ever actually imposed — but if they were, they had little to no effect on the American companies, since they haven't been allowed to sell weapons to mainland China since the 1989 Tiananmen Square massacre.