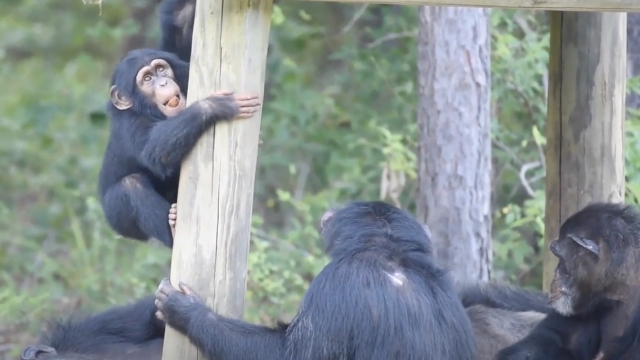 SMS
'Retirement' Home Helps Chimpanzees Thrive After Medical Research
By Tammy Estwick
By Tammy Estwick
October 25, 2022
Chimp Haven has housed and helped hundreds of apes that are no longer needed in medical research.

Sitting on almost 200 acres near Shreveport, Louisiana, is Chimp Haven — a place where chimpanzees once used in research go to "retire."

Since 1995, the sanctuary, supported by a nonprofit organization, has taken care of primates after they are no longer needed for medical experiments.

Most of the more than 300 hairy residents served as research subjects to help humans live healthier lives. Now it's up to the caretakers at Chimp Haven to make sure the chimps also live safe, healthy lives.

"Their lives were basically dedicated to us as humans and being able to come up with vaccinations and for us to learn more about human disease and how we can prolong our lives," said Dr. Raven Jackson, director of veterinary care at Chimp Haven.

As a girl, Dr. Jackson says she was fascinated and inspired by the relationship famed conservationist and activist Jane Goodall had with apes in the wild. She got to meet her idol when Goodall visited Chimp Haven in 2018.

"For her to give us the green light saying that we were doing a good job meant a ton to me," Dr. Jackson said.

Goodall isn't the only taste of fame that has come to the sanctuary. The chimps themselves became Hollywood stars in 2011 — or at least their sound did.

"I think it's really interesting that most people don't know that the audio recordings from 'Planet of the Apes' were actually featured here from Chimp Haven," Dr. Jackson said. "When I went to see 'Planet of the Apes,' I could actually pick out the individuals that of the vocalizations I heard just because I'm so used to hearing them here, just like you know your child's cry." 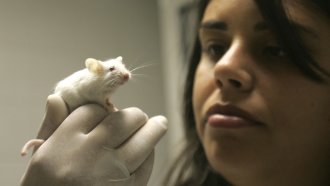 Why We Experiment On Animals

Soon, the public can have a chance at meeting some of the stars, as its gates reopen after being closed for three years due to COVID protocols.

COVID was just one challenge Chimp Haven has had to work through. Other obstacles have had repercussions, including chimps escaping and chimp-on-chimp violence.

The USDA handed down an official warning in 2021, saying that although staff members were quick to act, animal-handling rules were violated in both incidents.

Dr. Jackson says releasing the chimps into the wild is not an option because they may not know how to search for food after years of people providing it for them. Also, they may be lacking the skills to integrate with wild animals.

"Depending on their research and what they may have been exposed to, it just isn't wise or safe to put them back into the wild," Dr. Jackson said.

Through it all, the director says there have been lessons learned.

"I think in life we have to learn," she said. "We are now the world's largest chimpanzee sanctuary working with any animals, specifically chimpanzees. We have to know that they can do anything at any time, so we have to always have our head on a swivel and learn."

Eventually, Chimp Haven might not be needed: The use of chimpanzees in labs is being phased out due to ethical concerns and the cost of caring for them. Plus, the federal government no longer funds experiments that use chimps.

But for now, Dr. Jackson is staying busy caring for the guests at Chimp Haven and sharing what has been learned there with other sanctuaries around the world.