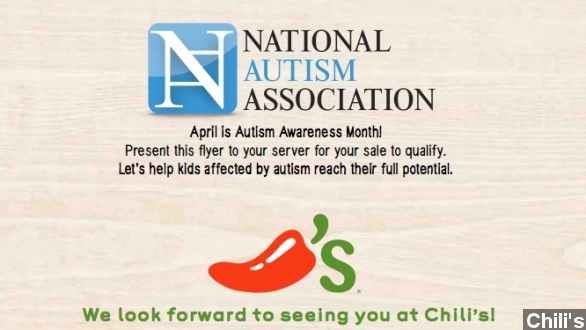 After facing heated backlash, the restaurant chain Chili's has canceled a fundraiser Monday which would have benefited a group linked to the anti-vaccination movement.

The canceled fundraiser for Autism Awareness Month would have sent 10 percent of all profits made on April 7 at more than 1,200 Chili's locations around the country Monday to the National Autism Association.

The problem is, the National Autism Association is known by many not for its contributions to autism research but for its habit of cautioning parents against vaccinating children.

The anti-vaccination debate is a controversial one. Those who are opposed to vaccination claim there's a link between vaccinations and autism.

"Without a doubt in my mind I believe vaccinations triggered Evan's Autism. ... People are also dying from vaccinations. Evan my son died in front of me for 2 minutes."

But the majority of the medical community says there is no link — and that includes the Centers for Disease Control and Prevention. A 2005 study found autism rates in Japan actually went up after the MMR vaccine was banned there. (Via Journal of Child Psychology and Psychiatry)

And it's worth noting the study that initially claimed a connection between MMR vaccines and autism has since been retracted after an investigation found the author had faked his results. (Via CNN)

Though the National Autism Association stops short of a "yes" or "no" on vaccinations on its website, instead painting its position as somewhere in the middle, that didn't stop many from criticizing the Chili's partnership.

A writer for Forbes says, "Illustrating precisely why awareness of something is not the same as understanding it well, Chili’s has made a particularly poor choice of entity to support if helping children with autism reach their potential is their goal." (Via Forbes)

And late Sunday, Chili's gave in. In a statement reprinted in The Huffington Post, a spokesperson said the restaurant chain "will find another way to support this worthy effort in the future with again our sole intention being to help families affected by autism."

Vaccine proponents have blamed lower vaccination rates for outbreaks of measles and whooping cough in areas including Washington State, California and Colorado.