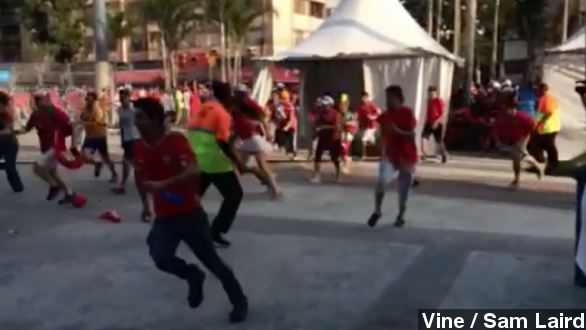 By Christian Bryant
June 18, 2014
According to FIFA, 85 fans were detained by Rio de Janeiro police after they blew past security and tried to enter the stadium without tickets.
SHOW TRANSCRIPT

Despite all the excitement surrounding Spain's national men's soccer team — the 2010 World Cup champions — Chile dealt them a loss Wednesday, their second in this year's World Cup and their ticket home. (Via Flickr / Aanjhan Ranganathan)

But that wasn't the only action at Maracana Stadium as some ticketless Chilean fans reportedly broke through physical barriers before the match. Hey, maybe they knew something we didn't.

Mashable reporter Sam Laird captured this on Vine — the moment when dozens of Chilean fans stormed the stadium in a mad dash.

A Wall Street Journal reporter described what happened once those fans got through, saying, "They stormed through the media center, upending chairs and causing some minor damage before swarming into an outside corridor."

The Daily Mail wrote the fans weren't interested in harming anyone or stealing any equipment, but this video shows a wall collapsing — a display of just how crazy things got before the match.

"Probably a couple hundred Chile fans burst through the main doors of the press center. ... They were desperate, trying to find their way into the stadium. So, they obviously had no idea where they were going." (Via CNN)

An ESPN article reports security was initially overwhelmed and was slow to respond. They later regained control of the situation and detained a number of the Chilean fans.

Yahoo Sports got video of a Chile fan earlier in the day complaining that FIFA illegally allows ticket resellers to sell at ridiculously high prices. "FIFA needs to change and forbid ticket reselling and they have to allow all Chileans to enter the match."

FIFA released a statement following the incident saying 85 intruders were detained by Rio de Janeiro police, adding they condemn the acts of violence and measures will be taken in due time.

We're not sure what's going to happen to those Chilean fans that were detained, but maybe they'll get a chance to see their team play against the Netherlands on Monday, June 23.