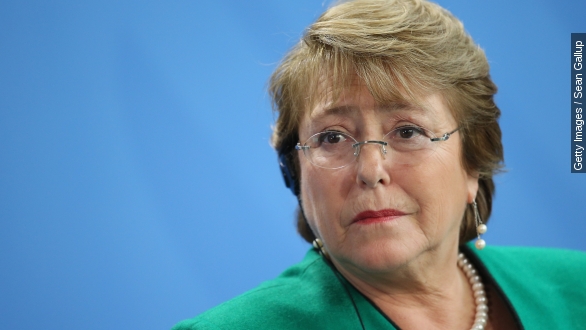 SMS
Chile's President Fires Cabinet Amid Corruption
By Kate Grumke
By Kate Grumke
May 7, 2015
Chile's president asked her cabinet to hand in their resignations amid multiple recent corruption scandals in Chile.
SHOW TRANSCRIPT

Chile's president Michelle Bachelet is asking all of her cabinet to hand in their resignations amid a corruption scandal.

On Wednesday night, the president said she would decide who stays and who goes in the next 72 hours during an interview on Chile's Canal 13 with popular Univision host Don Francisco.

The change in the cabinet is an attempt at reform amid a wave of corruption allegations in the South American country that is usually known for having a relatively stable political and economic environment.

Earlier this year, Bachelet's son was accused of using his political influence to get a large bank loan for his wife. He was cleared of any wrongdoing but ended up resigning as head of the government's charitable foundations because of the political scandal.

And in the past year Chile has seen a series of corruption cases including a bribery and tax evasion scandal surrounding the financial company Penta. (Video via TeleSur)

The corruption charges have even reached Bachelet, who faced questions about campaign donations. At the end of April the President called for a rewriting of the constitution to make campaign financing more transparent. (Video via Gobierno de Chile)

The switchup of the cabinet comes as Bachelet's approval ratings have been hovering around 30% — the lowest they have been since she was reelected last year.