Children Locked Up After Refusing To Have Lunch With Father 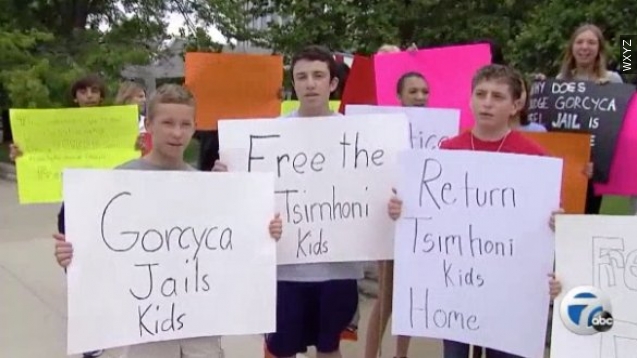 SMS
Children Locked Up After Refusing To Have Lunch With Father
By Ryan Biek
By Ryan Biek
July 9, 2015
Three children in Michigan have been sent to a juvenile detention facility after refusing to see their father; they claim he hit their mother.
SHOW TRANSCRIPT

A custody battle in Detroit has gone very public after three children were put in a juvenile detention facility June 24 allegedly for refusing to have lunch with their father. The children say they saw him hit their mother, hence the refusal.

Supporters of the children of Maya and Omer Tsimhoni picketed against the decision, the latest incident in a long legal custody fight over the kids.

According to Newsy's partners at WXYZ, Judge Lisa Gorcyca publicly questioned the oldest child's intelligence after he claimed his father was violent. After she said his father was a great man, she told the teen he could stay at the detention facility until he graduated high school.

The children are separated from one another at the facility, and their mother is not allowed to see them.

Protester Zareen Torrey told WXYZ: "We, as a community, feel that it's unjust. The children have voiced their opinion of why they don't feel comfortable with the situation, and [the judge] just doesn't seem to care."

"A very hard slap in the face to the mom," protester Gwen Schultz told WXYZ.

A legal expert told WJBK: "To treat this like a case of contempt where she sends them away until they're willing to comply with court order seems harsh with respect to young children. It certainly can raise all kinds of constitutional issues."

In a press release, the father's lawyer said her client "is a loving, caring father who desires a healthy relationship with his children. He has spent the past five years combatting unsubstantiated, manipulative and false claims made by [the mother]."

Omer Tsimhoni told New York Observer he never hit his ex-wife and claims the kids have resisted contact with him since an incident five years ago when Maya alleges he pushed her.

According to WJBK, the father is the only one with the power to have the children released, but he left for Israel for business reasons and is not expected to return for another two weeks.