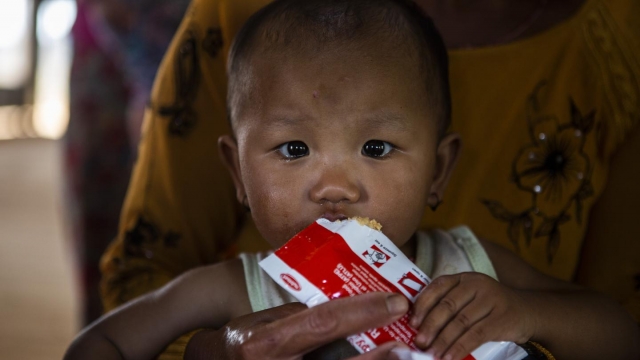 SMS
Children Are In Danger In Many Countries Due To A Food Shortage
By Jason Bellini
By Jason Bellini
August 4, 2022
UNICEF is warning a food shortage in many countries is putting thousands of children in danger.

Children are in trouble.

And nowhere is that more apparent than in the Horn of Africa, where food shortages are expected, in the coming months, to get much worse.

The head of UNICEF USA, Michael Nyenhuis, tells Newsy that the lives of 10 million children, in this one part of the world alone, are now at risk.

MICHAEL NYENHUIS: The crisis is not only real, but it's coming. I think this is going to be sort of the next big crisis we're going to talk about on the world stage.

NYENHUIS: Yeah. And the chances of it getting out of hand are real. And so we need intervention fast.

The threat is child wasting; the step before starvation.

"This is a ready to use therapeutic food. It's high protein, it's easy to distribute. It's got a long shelf life. We need to get this in the hands of the of the parents and the children who are really suffering from this," Nyenhuis said.

But there is not enough to save every child. Nyenhuis says global inflation has made it 16% more expensive.

BELLINI: You don't have enough funding to buy as much as you'd want to?

NYENHUIS: Yeah. Right now there isn't enough funding to buy as much as we really would like to.

The paste is an emergency intervention during a global food insecurity crisis. That comes after four years of drought in the Horn of Africa.

Fertilizer and other food production costs skyrocketed, and the war in Ukraine halted, until just this week, the export of grain that  feeds millions.

BELLINI: If Ukraine's able to ship some of the 20 million tons of grain that are sitting in silos, if they're able to start distributing that. How big of an impact would that have?

NYENHUIS: Well, it's definitely, definitely helpful. That's not going to solve it.

Russia's invasion of Ukraine threatens the lives of that country's children as well.

And then there are the nearly a quarter million children that Ukraine says the Russians forcibly removed from their homes.

BELLINI: Ukraine's permanent representative to the U.N. says that 234,000 children, as of June, have been transferred to Russia from Ukraine. Do you share that assessment and how worrisome is this?

NYHENHUIS: We're concerned about all the children who had to leave forcibly because of fighting, because of violence. So, yeah, it's a big concern of ours.

BELLINI: Are you in contact with Russian authorities as far as the welfare of these children is concerned?

NYENHUIS: I can't speak specifically about the situation in Russia and the conversations that we may be having with the with the Russian government. But we put the highest priority on children that are displaced from their homes, and that's true of all countries surrounding Ukraine.

So UNICEF fights for the children on two fronts; Ukraine and Africa.

BELLINI: It sounds like you're ringing the alarm bells right now.

NYENHUIS: This is the moment to ring the alarm bells. This is a serious global crisis affecting millions and millions of children and their families. We know how to intervene. We need the resources to intervene.