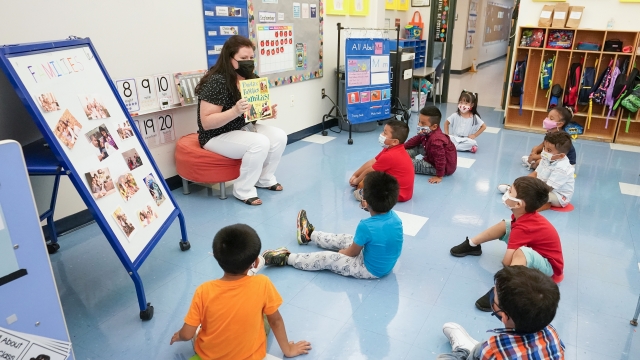 Jessica Duckett is the director of Teddy Bear Daycare and Preschool in northern Virginia.

"It's hard to be there for the staff, the families, the children. It's hard because I feel like we're running out of answers sometimes," she said.

Duckett says her best days at work are when she can help a family, but that's getting harder and harder as she struggles to keep her schools fully staffed.

"I have about 60 children enrolled. While my capacity is 109, I only have 60 enrolled and I have about 15 staff, and I'm probably short five to six full-time staff in order to get fully staffed," she said.

Staffing has long been an issue at daycares and preschools. It's a labor-intensive job with low pay and often no benefits.

Now, President Joe Biden wants the government to step in and subsidize child care as part of his Build Back Better plan.

"This is a fundamental game changer for families and for our economy as more parents, especially women, can go back to work and work in the workforce," he said.

The plan seeks $400 billion in new federal spending to make child care more affordable for families — providing universal pre-K for all 3- and 4-year-olds and limiting child care costs to no more than 7% of parents' income for families making less than $300,000 a year.

About 1 million people were working in child care as of February 2020. Over one-third of the workforce left during the pandemic, and nearly 127,000 workers have still not returned, according to the National Association for the Education of Young Children.

"COVID was that straw that broke the camel's back in labor, and we're in what I would call a perfect storm for a labor shortage in child care," said Cindy Lehnhoff, director of the National Child Care Association.

The average hourly wage for a child care worker is about $12. A September 2021 report from the U.S. Treasury Department found that in 41 states, more than 15% of child care workers live below the poverty line.

Duckett says low wages pose the biggest challenge to hiring new workers, but she also says she can't afford to pay workers more unless she brings in more children to her facilities, and she can't do that without full staffing.

"It's frustrating to see that my staff, my good quality staff that I have, are being stressed because we're short-staffed," she said. "The families are being stressed because I have some that have babies that they want to come in a couple of months and I have to pray that we have staff to bring those siblings in. And so, I think it's just an unfair, unfortunate situation for everybody."

Duckett says more resources will help families and make the system work better for everyone.

"I think that the fact that this is going to help multiple families at different levels is one of the most important things for me because I think that it makes it a little bit more even, more fair," she said. "The same thing for the centers — the schools being able to [let] everybody get a piece of the pie, essentially, also will help and make it fair."