The High Cost Of Child Care Is Hindering Young Families 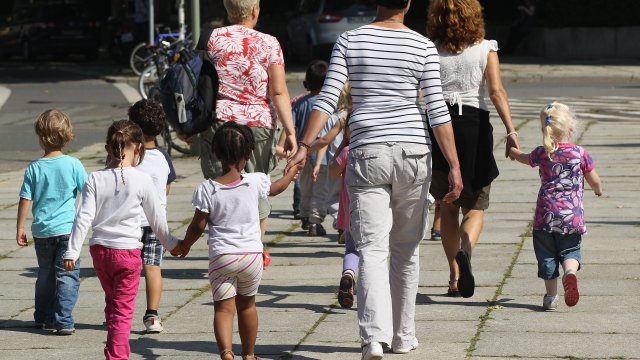 The cost of raising a child is skyrocketing in the U.S. — and it's having far-reaching impacts on a generation of Americans already straddled with student debt.

"It has affected people’s family planning. If you want more than one child, I think daycare is often enough reason that people space their kids out four and five years apart, just because it's really hard to do," said Olivia Terpstra.

Olivia Terpstra, a single mother with a two-month-old son in Virginia, said it was hard finding a daycare that somewhat fit within her budget.

"I looked at Care.com, I asked friends for referrals, I asked coworkers, and I would say it probably took me four months of just calling people," Terpstra said.

And she's not alone. Across the county, families are spending more than 7% of their income on child care — above the figure recommended by the Department of Health and Human Services. The average cost is around $9,000 a year — up 7.5% from 2016. For millennials that are already struggling with student debt and stagnant wages, the situation is even worse, with virtually no affordable child care available at all.

It's caught the attention of some lawmakers in Washington, including presidential candidate Elizabeth Warren, who proposes universal child care. While Warren is the only 2020 candidate to offer a solution so far, Democrats and Republicans in Congress — from U.S. Sens. Maggie Hassan to Richard Burr — have also called for reform of some sort.

And the impact reaches far beyond family planning. The cost of child care could also complicate the student debt crisis for generations to come.

"If you compare child care expenses across the states compared to how much it costs to pay in-state tuition, those numbers are pretty comparable, and sometimes they're even higher for infant care costs. And so you don't have the time — you don't have the years — to be able to make those savings," said Elise Gould, senior economist at the Economic Policy Institute.

And that's not all. With so many families feeling stretched thin, it's not uncommon for one of the parents of a two-income household to stop working and stay at home with their kids instead.

"Oftentimes that is a woman that has to cut back her hours of work, and then you have less participation in the labor force, you have potentially lower growth in the economy," Gould said.