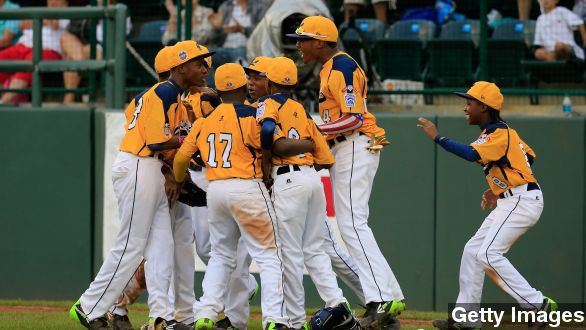 Most of the coverage about the Little League World Series so far has been devoted to Philadelphia's star pitcher Mo'ne Davis. But Davis's team dropped out of the tournament Thursday — and it's the team who knocked them out that's writing the headlines now.

Chicago's Jackie Robinson West claimed the U.S. Championship title in a 7-5 victory over Las Vegas Saturday. After falling to Vegas 13-2 in the second game of the tournament, Chicago clawed their way back through the loser's bracket for revenge.

And on their road to victory, Jackie Robinson West has swept up their hometown in Little League fever. Massive watch parties for JRW games have sprung up all across Chicago, featuring all the intensity of a World Cup match. (Video via WBBM)

They're already being given a welcome-home parade, courtesy of Chicago's mayor Rahm Emanuel.

And both the Cubs and the White Sox have expressed their appreciation for the feats of their junior peers.

So as Jackie Robinson West celebrates taking the U.S. title, and gears up for their international championship game against South Korea Sunday, they're also preparing to make history — not just for what they're doing, but for who they are and where they're coming from.

As Time notes, JRW is the first all-black Little League team to win the championship — an important achievement given baseball's declining popularity among African American kids. New York Mets right fielder Curtis Granderson told Time, "It gets kid's attention. ... Hopefully, the conversation about African-Americans and baseball continues, and some positives for our sport will come out of it."

JRW's stunning success is also a much-needed beacon of hope for Chicago, which has infamously suffered from a rash of violence and gang activity in recent years, leading to dismal headlines and dark portrayals of the city by the media. (Video via CNN)

And the city seems to be enjoying the media's change of pace. One resident told the Chicago Tribune, "We get so much negative publicity with gangs and shootings that you have no idea how much fun it is to see the attention this has created all over."

Or, as one ESPN writer puts it, "Just the sight of a group of young black kids doing something collectively with purpose and meaning and publicly achieving marginal historical success in Chicago is equivalent to giving someone who is having a hard time breathing an oxygen tube."

All told, perhaps nothing sums up the importance of Jackie Robinson West's championship better than this heartfelt editorial from the Chicago Sun-Times.

"Thanks for reminding us that, for all the bad headlines, Chicago is full of good kids like you, of every color and in every neighborhood. Forgive us for the need to be reminded."

Chicago faces off against Seoul Sunday at 3 p.m. in the World Championship game. They're only the second Chicago team to make it this far — their predecessors, North Roseland, fell to West Tokyo back in 1967.