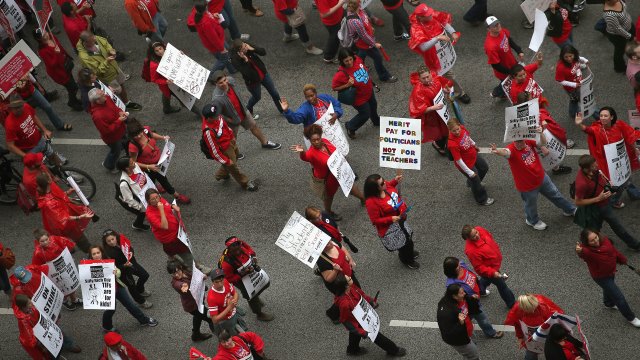 The strike comes after weeks of failed negotiations between the city and union, forcing around 29,000 teachers and 300,000 students out of class.

Unable to hash out a new deal with the city, the Chicago Teachers’ Union has gone on strike.

Nearly 29,000 teachers are out of the classroom and some are hitting the picket line. The union wants smaller class sizes, additional support staffing – such as nurses and librarians – and better pay.

Around 300,000 students are impacted by this strike. But while class is not in session, the Chicago Public School District is keeping schools open so that students have a place to go during the day. Other child care options include various programs at parks and libraries around the city.

As part of preparations for the strike, the city brought in nurses and support staff to help supervise students that do come to the school, but are stressing to parents that staffing is limited. In addition, the schools are providing students with breakfast and lunch so that kids who rely on meals from school are fed while the strike is underway.

Mayor Lori Lightfoot and her team worked to meet some of the union’s demands prior to the strike. They dropped a proposal to reduce teacher preparation time and added support for homeless students. They also offered a 16 percent raise over five years. But the teachers union said those raises wouldn't match the city's rising rent and housing prices.

Both sides have accused the other of playing games and of not bringing serious proposals to the negotiation table.