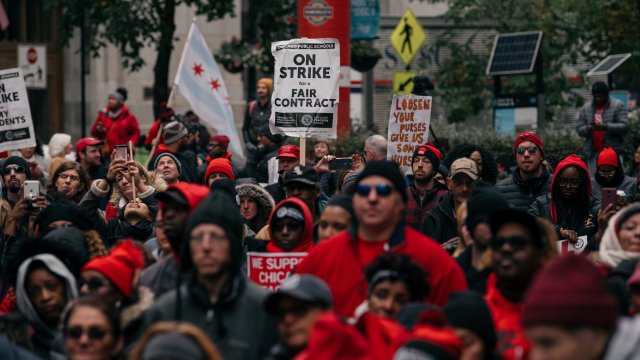 Thousands of students in Chicago missed another day of school Monday as negotiations between Chicago Public Schools and striking teachers continued.

During a press conference Sunday, Chicago Mayor Lori Lightfoot said CPS and the union representing school support staff reached a tentative deal. But talks with the Chicago Teachers Union remained at a standstill.

"We are enormously disappointed that CTU simply cannot take yes for an answer," Lightfoot said.

Teachers have been on the picket lines since Oct. 17. Their previous contract expired July 1, and they're calling for guaranteed smaller class sizes, more support staff like counselors and nurses, and higher pay.

The teachers union and Chicago Public Schools agree in principle on many key issues. But the two sides disagree on exact numbers. The union also wants CPS to put all its promises in writing.

Mayor Lightfoot said the city doesn't have enough money to meet all the union's demands. But union leaders and teachers believe the city has plenty of money — it's just not being spent on education.