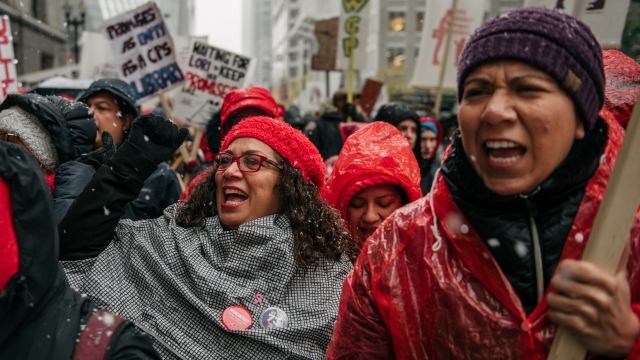 ​Mayor Lori Lightfoot announced the school district reached an agreement with the Chicago Teachers Union after a closed-door meeting on Thursday.

After almost two weeks of protests by tens of thousands of Chicago educators, the city's teachers strike has ended.

Mayor Lori Lightfoot announced the school district reached an agreement with the Chicago Teachers Union after a closed-door meeting on Thursday. Union delegates had voted Wednesday to accept a tentative deal that includes pay raises, smaller class sizes and more support staff. But the deal hit a snag after Lightfoot refused to meet the union's demand to add 11 school days that were missed due to the strike. Both parties agreed to a compromise to make up five school days Thursday afternoon.

Lightfoot praised the strike's resolution in statement, saying: "I would be remiss if I did not address what has been lost over the course of the strike. Seniors' efforts at early college admissions were compromised; athletes missed out on competitions; students were not able to take the PSAT; and more. We will do everything in our power to mitigate the harms and keep our students moving forward to fulfill their destinies."

Thousands of Chicago public school teachers hit the picket lines on Oct. 17 after months of unsuccessful contract negotiations with the school district. More than 300,000 students were impacted by the strike, which was Chicago's longest school strike since 1987. Classes in the nation's third-largest school district will resume on Friday.