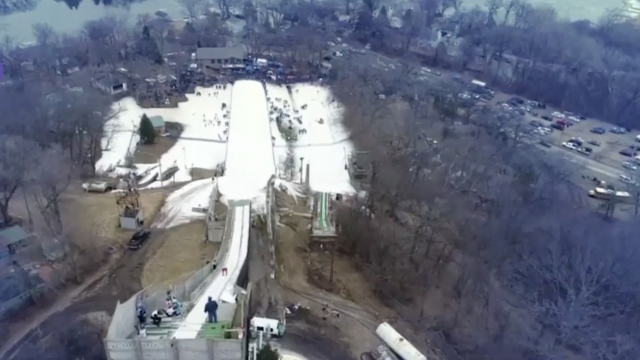 American winter Olympians from 30 states are going for the gold in Beijing,  including from some places that might surprise you, like ski jumper Casey Larson from the flat lands of Barrington, Illinois; Patrick Casienca of nearby McHenry; and teammate Kevin Bickner of another Chicago suburb, Wauconda.

It may be surprising to learn where they first learned how to soar through the sky on skis — only about 40 miles northwest of the Windy City in the village of Fox River Grove at the Norge Ski Club.

"You don't have to be from a mountain town to become a great ski jumper," said Guy Larson, chairman of Norge Ski Training Center.

Larson's son Casey began his path to the Olympics at age 6 at Norge Ski Club, the oldest continually operated ski club in the U.S.

Built in 1905 by Norwegian immigrants, the club allowed them to continue their love of flying high amid the height-challenged landscape of their new home in Illinois.

In the 1930s, the club staged public ski jump events that drew thousands of spectators, including in Soldier Field where they built a wooden ramp in the future home of the Chicago Bears.

Now one of 31 ski jumping clubs in 12 states, Norge rises 150 feet above the Fox River. It offers training for world-class, would-be Olympians and for folks just looking to challenge themselves, including kids.

"I think the funnest part is probably to fly," said Brady Blust, a ski jump student.

"They were all still in remote learning, so it was the two times a week he could come together, socialize with other kids," said Brady's mom, Jackie Blust. "Everyone was cheering each other on."

The facility puts its 70-meter hill to work year round, with no snow needed as skiers slide down plastic bristles while the sun shines.

The tower is its own attraction, seen from miles around catching the eye of Jake Lindquist's 4-year-old daughter Julia.

"She consistently kept saying, 'I'm going to do that. I want to jump. I'm going to go down that,' so it just ... it never let up," Lindquist said.

Kevin Bickner and Casey Larson are representing the club at the Olympics for the second time after having competed in 2018 in South Korea. Patrick Gasienica earned a spot for the first time this year, perhaps inspiring other kids who live far away from any mountains to dream big about reaching new heights.

"It's so rewarding to see kids improve as they go up, and, you know, then you realize these kids have a chance to make the Olympics," Norge Ski Club president Scott Smith said.