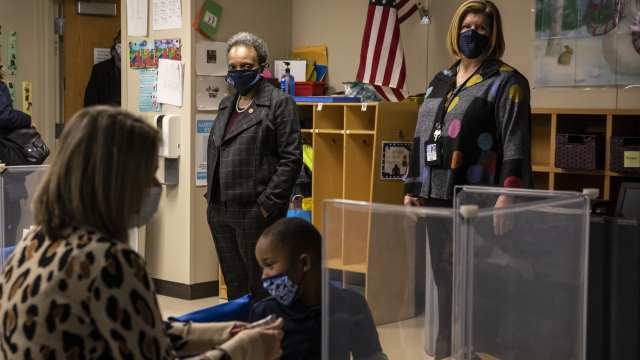 Chicago Public Schools are again delaying the return of in-person classes for more than 60,000 students after failing to reach an agreement on reopening schools with the Chicago Teachers Union.

The only real update yesterday from the school district was the late-night announcement that kindergarten-8th grade students would remain in remote learning today. That update came down hours after most parents had likely put their kids to bed, not knowing if they were going to have to wake them up early to get them to school this morning.

But sources close to the negotiations told the local ABC station that over the last two days CPS and the teachers union reached a tentative agreement on a robust testing program for both students and staff and the two sides are reportedly close to agreeing on a deal to vaccinate 1,500 teachers a week.

That's been a huge sticking point for the CTU. It does not want any teacher resuming in-person instruction before they're vaccinated.

District officials plan to start vaccinating employees at school sites later this month, but under their current plan the majority of teachers would only get shots after high-exposure individuals like security staff, cafeteria workers, bus aides and technology coordinators.

According to the ABC station's sources, CPS and CTU are still not agreeing on what health matrix should be used to trigger closing classrooms and how to accommodate teachers and staff with underlying health conditions.

As for today, CPS is extending its cooling-off period through at least the end of the day to allow for more talks, saying that as those negotiations continue, teachers won't be locked out of their email and virtual classroom like district officials initially threatened to do if they did not return to schools earlier this week.

But if that does end up happening, either tomorrow or Monday, the teachers union has already voted to strike.

It's worth noting, though, that tomorrow is a non-attendance day for students, so it's unclear if teachers will be required to be physically present at school.