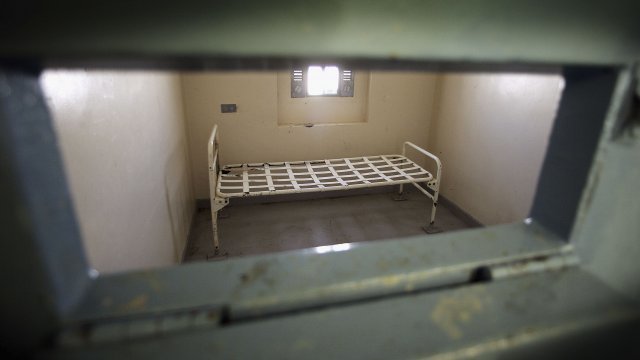 SMS
How One Of The Country’s Largest Jails Got Rid of Solitary Confinement
By Jamal Andress
By Jamal Andress
May 23, 2018
Despite the controversy surrounding the practice, more than 67,000 prisoners across the country still spend 23 hours of their day locked away.
SHOW TRANSCRIPT

The psychological effects of solitary confinement have been linked to anxiety, depression and suicidal thoughts.

Kalief Browder spent months in solitary confinement at Rikers Island without being convicted of a crime, before ultimately taking his own life a few months after his release.

Prison officials use solitary confinement as a punishment for a variety of infractions, from violence with other inmates to drug use or possession. That said, solitary confinement practices have always been hard to track because many state corrections departments don't log the information, and the practice can have different names in different states.

Despite the controversy surrounding the practice, thousands of prisoners across the country still spend 23 hours of their day locked away without human interaction.

The most recent comprehensive study of solitary confinement found 67,000 prisoners were kept in some sort of restrictive housing in 2015 — that's being locked in a cell for at least 22 hours a day for 15 days or more.

In Louisiana, Utah and Nebraska, more than 10 percent of the respective prison populations were kept in solitary in 2015. Texas, on the other hand, kept its prisoners in solitary the longest. Of the nearly 3,000 prisoners nationwide held in solitary for more than six years, more than half are in Texas.

Dr. Nneka Jones Tapia is a psychologist who has worked in corrections for nearly 12 years in Chicago. In 2015, she was named warden of Cook County Jail, making her the first mental health professional to head up a prison or jail in the U.S., according to the Cook County Sheriff’s office.

"There should be no such thing as solitary confinement," Dr. Jones Tapia said.

Dr. Jones Tapia says she recognizes the dangers of solitary confinement, and because of that, she wanted to make sure Cook County handled things differently.

She was appointed executive director by Sheriff Tom Dart. It was Sheriff Dart’s decision to get rid of solitary confinement and he started the process before Dr. Jones Tapia was appointed.

"We said that we're no longer going to house people — who had, you know, done some egregious behavior — in their cell for 23 hours a day. We're going to discipline them for their behaviors, nonetheless, but we're going to have them to come out of their cell for a few hours a day. … And so out of, let's say a 12 to 14 hour day, they're out for five hours. That was remarkable," Dr. Jones Tapia said.

Along with cutting down on the isolation for inmates, Dr. Jones Tapia instituted group interaction with corrections officers, with the hope that the inmates would gain something from their time together.

"Why not have them commune with each other? There's nothing against communing and fellowshipping. But what we found, and this is where the psychologist in me recognized something that we could do different … why not put our staff inside of the tier so that instead of them feeding off of the negative behaviors of each other, then hopefully our staff can model some positive behaviors," Dr. Jones Tapia said.

"We saw staff that would sit at a picnic table with inmates all around them engaging, listening. They're learning about each other. … We saw the incidents started to plummet," Dr. Jones Tapia said.

Despite solitary confinement still being a widespread practice across the country, researchers say the tide has shifted among prison directors in recent years. While solitary confinement was once viewed as "central to prisoner management," now organizations like the Association of State Correctional Administrators and the American Correctional Association are pushing to limit the practice.