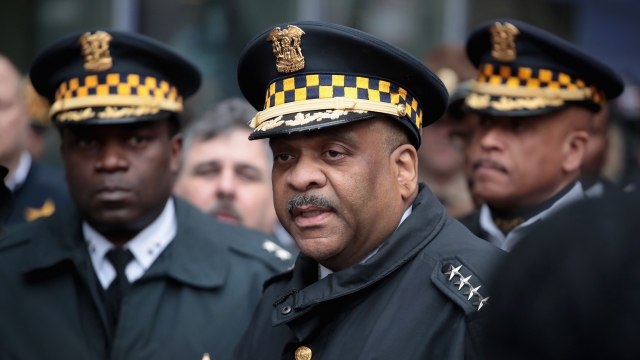 Chicago Police Superintendent Eddie Johnson announced Thursday he is retiring after more than 30 years on the force.

"It’s time for someone else to pin these four stars to their shoulders," Johnson said. "These stars can sometimes feel like carrying the weight of the world. But I'm confident that I leave CPD in a better place than when I became superintendent."

The Chicago native said he'll step down at the end of the year so that he can spend more time with his family. The announcement comes a few weeks after he was found asleep behind the wheel of his car at a stop sign. Johnson chalked up the incident to a change in his blood pressure medication. Mayor Lori Lightfoot said he told her he'd also had "a couple of drinks with dinner" before driving. An internal investigation into the incident is ongoing.

Johnson has served as the head of the nation's second-largest municipal police force for three years. He was appointed in 2016 following the release of a dashcam video showing the shooting death of 17-year-old Laquan McDonald by now-former Officer Jason Van Dyke. That was also around the same time gun violence spiked to levels Chicago had not seen since the mid-'90s.

Johnson said he'd "experienced the trauma of gun violence firsthand ... like too many children in Chicago," and that reducing these shootings was one of the proudest accomplishments of his career.

"I've been blessed to have this opportunity, and I'm thankful for the people of Chicago for trusting me with their safety. God bless CPD and god bless Chicago. Thank you."