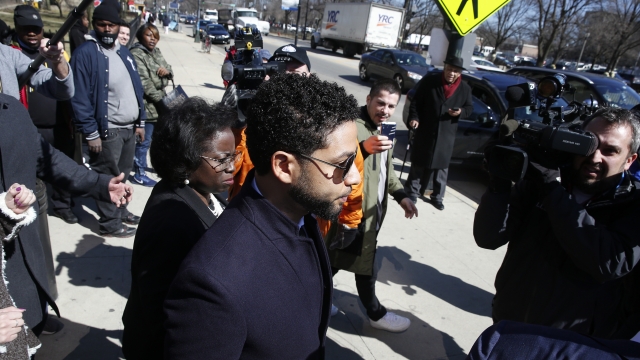 SMS
Chicago PD Release Video Footage Connected To Smollett Investigation
By Katherine Biek
By Katherine Biek
June 25, 2019
In a video of police officers responding to Jussie Smollett's 911 call, the actor greets the officers with a rope coiled around his neck.
SHOW TRANSCRIPT

In the video, recorded on Jan. 29, officers arrive at Smollett's apartment. The actor greets them with a rope coiled multiple times around his neck.

"Do you want to take it off or anything?" one of the police officers asked.

"Yeah, I do. I just wanted y'all to see it," Smollett responded.

The body camera is turned off soon after at Smollett's request, but he reported to police at the time that he'd been attacked by two men who put the rope around his neck, poured bleach on him and yelled racial and homophobic slurs.

Police initially investigated the alleged incident as a hate crime. But they later concluded that Smollett had staged the attack and filed a false police report. He was indicted on 16 felony counts, but Chicago prosecutors eventually dropped all charges against him.

Altogether, Chicago police publicly released almost 70 hours of footage related to their investigation Monday. Another one of the videos shows the brothers who say they were paid by Smollett to orchestrate the attack. They're shown riding around in a taxi while wearing what looks like hazmat suits on the night of January 29.

A judge approved a request Friday for a special prosecutor to independently investigate the handling of the Smollett case. As Newsy previously reported, that prosecutor will have the power to pursue charges for any crimes they believe were committed during the investigation, including the ability to reopen criminal proceedings against Smollett.