Chicago Mayor Gives Interviews Only To POC On Inauguration Anniversary 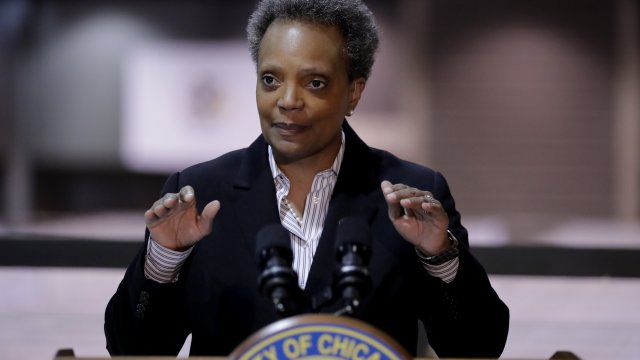 SMS
Chicago Mayor Gives Interviews Only To POC On Inauguration Anniversary
By Jamal Andress
By Jamal Andress
May 20, 2021
Mayor Lightfoot says this is about pushing for diversity in the media, but critics have called it discriminatory and performative.
SHOW TRANSCRIPT

"The facts are the facts, and the fact is this press corps does not reflect the diversity of this city," Chicago Mayor Lori Lightfoot said.

As Chicago Mayor Lori Lightfoot passes her second year in office, she angered many local media members with this letter.

"On the occasion of the two-year anniversary of my inauguration … I will be exclusively providing one-on-one interviews with journalists of color."

Mayor Lightfoot says this is about highlighting and fighting for diversity in the media — specifically, the media that covers City Hall.

But critics have called this decision discriminatory, performative and an overreach of executive power.

Gregory Pratt, a Latino Chicago Tribune reporter who covers City Hall, declined an opportunity to sit down with the mayor, saying: "I asked the mayor’s office to lift its condition on others and when they said no, we respectfully canceled. Politicians don’t get to choose who covers them."

Right-wing outlets and commenters decried the mayor's actions as racist.

Arionne Nettles, a journalism lecturer at Northwestern and a former Chicago media member, says the mayor's commitment to diversity needs to last all year.

NETTLES: "There are a million different press conferences and opportunities that so many Black and brown journalists get shut out of on a daily basis."

A local reporter with City Bureau offered a similar criticism online: "I wish Lightfoot's office would have granted one interview to our @city_bureau budget team last year who were mostly young women of color covering policy. Instead, they declined every single interview request."

Newsroom diversity is a longstanding problem in local and national newsrooms across the country. According to Pew, 76% of newsroom employees nationwide are White, and 61% are male — beating the national average.

Brandon Pope is the president of Chicago's NABJ chapter — the National Association of Black Journalists.

POPE: "Simply put, inclusion is not racism. Racism is a symptom of privilege. And the fact of the matter is, for a long time, for ages and ages, provisional publications, and let's just say White reporters, have had privilege. … Maybe those mayors or powerful officials didn't explicitly say, we're going to exclusively talk to White-owned media and White reporters, but that's what was happening."

Leaked emails show Mayor Lightfoot recently canceled her subscription to the Chicago Tribune because of critical press coverage and commentary there. The mayor of the nation’s third-largest city has also publicly clashed with other news outlets over reporting she considers unfair, leading some to believe this is more about getting back at the current press corps than newsroom diversity.