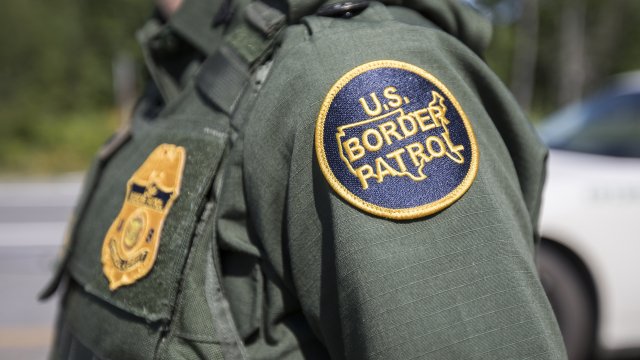 SMS
Chicago Leaders Condemn Deployment Of Elite Border Patrol Units
By Ben Schamisso
By Ben Schamisso
February 18, 2020
They decry Trump's plan to send 100 border agents to sanctuary cities and warn that it could depress the immigrants' count in the 2020 census.
SHOW TRANSCRIPT

"The state's attorney's office does not cooperate or engage with ICE. We did not then; we do not now."

Elected officials and immigrant advocates in Chicago are voicing their opposition to the Trump administration's latest crackdown on sanctuary cities. These are localities that refuse to help ICE identify and arrest undocumented immigrants.

Border Patrol is sending 100 officers — including elite tactical units known as BORTAC — to help ICE conduct arrests in the country's interior. BORTAC agents typically conduct high-risk missions against cartels and human traffickers along the border. But from February through May, some BORTAC agents will be deployed in sanctuary cities nationwide, including in New York City, Los Angeles and Chicago.

Advocates are calling the move an intimidation tactic whose "chilling effect" could repress the count of immigrants in the 2020 census. Households around the country will start receiving census documents in less than a month.

"This is a smokescreen by the president to seek to further intimidate, punish and prevent people from participating in the census. By the same token, it begs the question of what will 100 agents do nationally in 10 cities across the country."

Local officials say they haven't noticed ramped-up ICE presence in Chicago yet. An ICE spokesperson tells Newsy the border agents would only be "extra boots on the ground." He added: "These are still ICE-led operations. We're not going to change our tactics or escalate our use of force." On top of that, ICE's acting director says it's using the agents "to supplement enforcement activity in response to the resource challenges stemming from sanctuary city policies."

"To the lawmakers who support non-cooperation with ICE, please reconsider your position so that we can jointly prevent dangerous individuals like murderers, gang members, rapists, pedophiles, drug dealers and domestic abusers from being released back into our communities who are in violation of federal immigration law."

The city of Chicago prevents local police from cooperating with ICE unless the targeted individuals have pending or prior felony convictions, an outstanding criminal warrant or have been certified as a gang member. And the state of Illinois forbids counties from transferring undocumented people they jail to ICE custody unless ICE presents a judicial warrant. ICE says these policies greatly hurt agents' abilities to do their job, hence the need for additional resources.

But Chicago officials say cooperating with ICE would undermine the trust of immigrant communities and thereby make their city less safe.

"When victims and witnesses are afraid to come to court because they believe that there's the potential for ICE agents to scoop them and tear them from their families, then they simply stop participating."