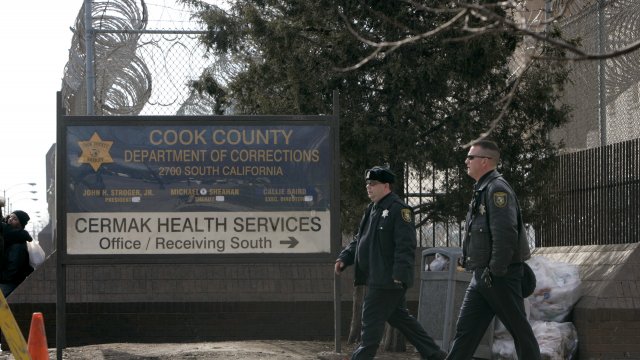 A correctional officer and two detainees at Chicago's Cook County Jail have tested positive for the coronavirus.

According to the sheriff's office, that correctional officer is in isolation at home and the two detainees have been housed in isolation cells since Friday.

A small number of Cook County Jail staff are quarantined at home due to their contact with the unidentified officer. As for the other detainees, jail staff are reportedly closely "monitoring the living units where the individuals who tested positive were housed."

"We're trying to walk this fine line here with making sure that the detainees' rights are all being followed to the T, but at the same time understanding that we have limited options when you have a confined population that you cannot just release," Cook County Sheriff Tom Dart said.

Across the U.S., public defenders, criminal justice advocates and some politicians are calling for jails and prisons to drastically reduce their populations due to the coronavirus.

In Chicago, the public defender's office filed a motion calling for hundreds of detainees to be released, including pregnant women, those with medical conditions, nonviolent offenders and detainees who are eligible for probation.

In New York, where 38 people inside city jails have tested positive for the coronavirus, the board of corrections has called for New York's Department of Corrections to "rapidly decrease the jail population" to minimize the chance of a potential outbreak.

Meanwhile, Cleveland's Cuyahoga County Jail has released upwards of 500 inmates to limit exposure to the coronavirus, reducing its population by more than a quarter in less than a week.

Men and women over the age of 50, who are most at risk of falling seriously ill due to the coronavirus, make up more than 15% of the federal and state prison population. For Newsy in Chicago, I'm Jamal Andress