Chicago Is Seeing An Exodus Of Black Americans 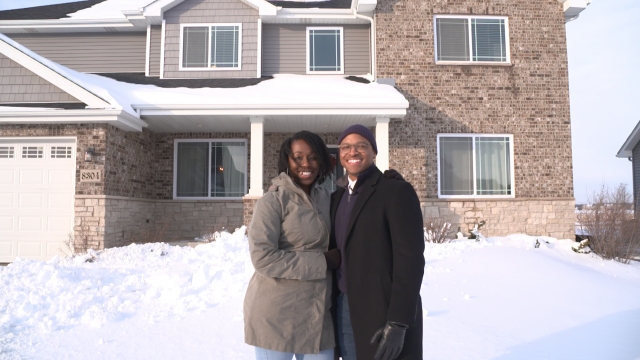 SMS
Chicago Is Seeing An Exodus Of Black Americans
By Ben Schamisso
By Ben Schamisso
February 7, 2022
Black families are moving out of Chicago, partly to seek lower costs of living and leave gun violence behind.

For the Parks family, living in their brand new house is a dream come true.

"We have four bedrooms, two and a half bathrooms, a loft; I've always dreamed of having a kitchen island," said Jennifer Parks.

It's a dream they pursued for years on the South Side of Chicago, until they decided five years ago that they'd seen enough.

"I could have been in the crossfire," Parks said. "If you needed food right away, you had to drive a far distance to go and get it."

They decided to try their luck 30 miles southeast in St. John, Indiana — a much, smaller place with better-rated public schools and a lower cost of living.

"This is my very happy cornfield," Jennifer said. "Taxes are a lot lower. It's hard to tell now, but food is still less expensive out here," Jason Parks added.

The Parks' say they couldn't be happier with their decision to leave the windy city behind.

They're among more than 250,000 Black Chicagoans who moved out of Chicago in the past 20 years, often to neighboring states like Indiana or south to Texas, Georgia or Arizona.

Chicago's Black population dropped by 10% over the last decade, continuing a steady decline since peaking in the 1980s.

"It's a quintessential story of a decline in terms of disinvestment in the areas that Black people live in, you know, on the South Side," said Stacey Sutton, professor of urban planning and policy at the University of Illinois Chicago.

Black people have long shaped the culture and identity of Chicago — the country’s third largest city and a popular landing spot during "The Great Migration."

An estimated 500,000 African Americans moved there from the South at the beginning of the 20th century.

"This has been a Black mecca for so long," Sutton said.

But gun violence, lack of jobs and good schools in the city's predominantly Black neighborhoods are pushing people out.

"It's the confluence," Sutton said. "If it was any one of these factors, I think people would be able to negotiate them and stay. People love Chicago. Chicagoans love their city."

Asiaha Butler could have long left Englewood: a once-vibrant Black community that is now one of Chicago’s most violent and run-down neighborhoods.

"A lot of shootings were happening on the block," Butler said. "We just said, 'A lot of our family left for Georgia. We might as well follow them there.'"

But she decided to stay put and fight for change as the head of a group that aims to revive the area.

“This is a vacant elementary school," Butler said. "My brother actually went here, graduated from here and now it's been vacant since 2013. "Us, in a collaboration with other organizations, are going to revamp this to be housing and a clinic."

Chicago Mayor Lori Lightfoot declined to be interviewed for this piece. She has vowed to address the disparities that have long plagued the city.

One of her signature projects is a $750 million plan to develop pockets of the South and West sides, including Englewood.

But Butler says it's not enough.

“Invest South/West, the project that they're working on, is centered in one location, whereas we have all of this that needs to be invested in," Butler said.

Latinos recently overtook Black people as the city’s largest minority — prompting a political fight between the two groups over how to redraw the city’s electoral map.

As for the Parks family in Indiana — they haven’t entirely closed the door on Chicago.

"I still would love to live downtown," Jason Parks said. "I’m not giving up on Chicago."