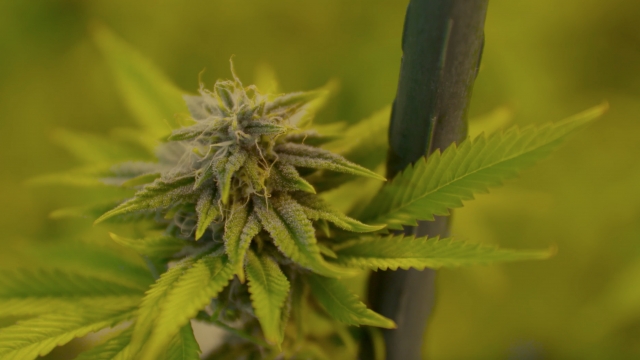 SMS
Chicago Gun Violence Prevention Gets A Boost From Weed Sales In 2020
By Christian Bryant
By Christian Bryant
January 1, 2020
Anti-violence organizations fought to have a portion of the profits from weed sales in 2020 go to groups working to stem gun violence.
SHOW TRANSCRIPT

Chasda Martin, director of programs at READI Chicago: "I want to be able to, during a hot summer night, just kind of sit out front and not hear a gunshot."

Chasda Martin is the director of programs for READI Chicago — READI stands for Rapid Employment and Development Initiative. It's one of many organizations in Chicago working to reduce gun violence in a city that's seen its fair share of it.

But the work of violence prevention is expensive, and in 2020, more funding will start coming from the sale of legal weed.

Illinois is the 11th state to legalize recreational weed. And while some of those states direct money from weed sales to gun violence prevention programs, Illinois is the only state to require it by law.

After administrative costs related to implementing the law, 25% will be set aside for services like economic development, youth programs and violence prevention services. We don't yet know exactly how much money that amounts to, but according to The Trace, that could mean millions for groups like READI, who say more public funding is needed.

Martin: "So predominantly, our funding is private. ... We do spend about $20K per participant, so roughly it's around $20 million a year that it costs to operate this program at this level."

READI's participants go through a two-year program that includes behavioral therapy, job training and support services like legal screenings and record expungement. Most of them are black men, a population most likely to be victims or perpetrators of Chicago's gun violence.

But funding isn't just for participants. Martin says turnover is high for the outreach workers who usher men through the program and, as a result, shoulder some of their pain. Money is used to bring in more staff and, for at least one of READI's partners, provide mandatory counseling for that staff.

Martin: "If you can imagine serving day in, day out in these spaces, and what toll that takes on you when you think about vicarious trauma, right, and the generational trauma, trauma that a lot of these participants have gone through in their communities, they bring that to the workspace. ... The more time you spend with the participant, the higher your rate of turnover will be, right, just because you're inheriting a lot of that trauma in the space."

READI is still a relatively new program that builds on research that shows that cognitive behavioral therapy and employment can reduce violence and recidivism. Martin says a study with UChicago's Urban Labs will be released in the fall showing just how effective they've been at meeting their goal — and being well-resourced will ultimately help them get there.

Martin: "In order for us to sustain this work, we can't have all of our money come from the private sector. … And if that happens, that just sends a signal to so many other stakeholders about the value of this work. And how it's being elevated to a public health crisis."