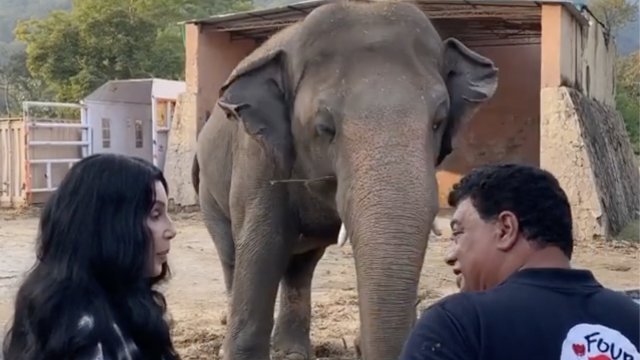 SMS
Cher Helps 'World's Loneliest Elephant' Find A New Home
By Ben Schamisso
By Ben Schamisso
November 30, 2020
Cher and an animal rights group organized the transfer of a mistreated elephant from a contentious zoo in Pakistan to a new sanctuary in Cambodia.
SHOW TRANSCRIPT

American pop star Cher spent the weekend in Pakistan helping the "world's loneliest elephant" prepare for its journey to a new home.

Cher helped rescue Kaavan, the elephant, from a controversial zoo in Pakistan.

After a long journey inside a crate, Kaavan stepped foot for the first time into his new home on Monday: a sanctuary in Cambodia where he'll enjoy the company of three other elephants.

"We are able to move Kaavan to Cambodia, where he will have a bigger place, a place where he can be an elephant," said Dr. Amir Khalil, a veterinarian with Four Paws International.

Cher and animal rights groups had been fighting for Kaavan's freedom for years.

The elephant had languished in an Islamabad zoo for 35 years, most of those years chained and malnourished.

"As soon as he's in Cambodia, he needs a good foot care program because the flooring in the enclosure here in Islamabad was not species-appropriate for him, so that ruined his feet," said Martin Bauer, spokesperson for Four Paws International.

After the animal lost his only partner in 2012 and was diagnosed as emotionally and physically damaged, activists dubbed him the "world's loneliest elephant."

Earlier this year, a Pakistani court shut down the zoo over its grim conditions and gave animal welfare organization Four Paws permission to free Kaavan.

Cher is making a documentary on the battle to save the animal.