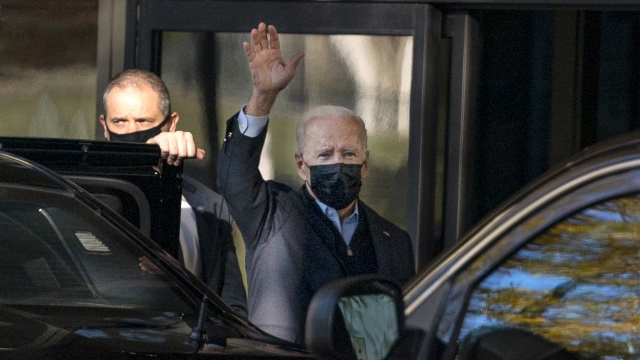 President Joe Biden remains "healthy" and "vigorous" and fit for duty, but is showing some signs of aging, his doctor said Friday after the oldest president in American history underwent his first routine physical in office and — in a history-making moment — briefly transferred power to Vice President Kamala Harris while he underwent a colonoscopy.

Vice President Harris, the first woman, first Black person and first person of South Asian descent to be vice president, was — for one hour and 25 minutes — acting president while President Biden was under anesthesia.

Over more than five hours Friday at Walter Reed National Military Medical Center, the president underwent a battery of blood, physical, gastrointestinal, dental, vision and neurological examinations. Dr. Kevin O'Connor, who has been President Biden's primary care physician since 2009, wrote in a six-page memo released by the White House that President Biden, who turns 79 on Saturday, "remains a healthy, vigorous, 78-year-old male, who is fit to successfully execute the duties of the Presidency."

O'Connor, however, revealed that he investigated President Biden for increased instances of "throat clearing" during public remarks and a stiffening of his gait. O'Connor reported that President Biden's coughing was the result of gastrointestinal reflux and that the stiffened gait was the result of a new diagnosis of "mild peripheral neuropathy," spinal arthritis and compensation for a broken foot sustained a year ago.

Interest in President Biden's health has been high ever since he declared his candidacy for the White House in 2019 and remains intense as speculation about a 2024 reelection bid swirls. The visit to the medical center in the Washington suburbs was for his first routine physical exam as president — and his first since December 2019.

As part of the screening, President Biden underwent an "extremely detailed neurological exam" that ruled out stroke, multiple sclerosis, Parkinson's and amyotrophic lateral sclerosis, but caught the neuropathy, which is nerve damage in the hands and feet. O'Connor said the most common cause of the condition is diabetes, but President Biden is not diabetic. The president, he said, would soon try custom orthotics to improve his gait.

During the course of President Biden's colonoscopy a "benign-appearing polyp" of about 3 millimeters was identified and removed and would be studied over the coming week. O'Connor said President Biden has never had colon cancer.

President Biden's reported body mass index classified him as slightly overweight, but his cholesterol was under control. President Biden, O'Connor said, is prescribed the anticoagulant Eliquis, the statin Crestor and the seasonal allergy spray Dymista, and regularly takes the over-the-counter allergy pill Allegra and the antacid Pepcid.

O'Connor reported that President Biden does not use tobacco products or drink alcohol and that he exercises at least five days per week.

As President Biden left the medical center in the afternoon, he said he was feeling "Great!"

"Great physical and a great House of Representatives vote," he said, referring to the House passage of his roughly $2 trillion social and environmental agenda.

After arriving back at the White House, he said "Nothing's changed" with his health, joking, "We're in great shape, and I'm looking forward to celebrating my 58th birthday."

While serving as acting president, Vice President Harris was working from her office in the West Wing, Psaki said. She later traveled to Ohio once President Biden awoke from the procedure.

President Biden was keenly aware of the history he was making when he selected Vice President Harris to be his running mate, Psaki said, adding that she made "history every day" in the job.

"Today was certainly another chapter in that history I think that will be noted for women, young girls across the country," she added.

During President Biden's last physical exam, doctors found the former vice president to be "healthy, vigorous" and "fit to successfully execute the duties of the Presidency," according to a doctor's report at the time.

In that report, O'Connor said that since 2003, President Biden has had episodes of atrial fibrillation, a type of irregular heartbeat that's potentially serious but treatable. At the time, O'Connor cited a list of tests that showed President Biden's heart was functioning normally and his only needed care was a blood thinner to prevent the most worrisome risk, blood clots or stroke.

President Biden had a brush with death in 1988, requiring surgery to repair two brain aneurysms, weak bulges in arteries, one of them leaking. President Biden has never had a recurrence, his doctor said, citing a test in 2014 that examined his arteries.

"All in all, according to this report it seems like he's in pretty good shape, with very common age-related illness,'' including atrial fibrillation and stiff gait, Linder said.

While the cause of President Biden's mild neuropathy is unknown, Linder said it is not an unusual problem and not a cause for concern unless it's bothersome for the president. He added that there is no reason to think the small polyp that was removed was cancerous, given President Biden's previous medical history.

"I would encourage him to continue to get exercise and eat right and take his medications,'' Linder said.

Pursuant to the 25th Amendment to the Constitution, President Biden signed letters to Sen. Patrick Leahy, who's president pro tempore of the Senate, and to House Speaker Nancy Pelosi at 10:10 a.m., saying he would be unable to discharge his duties while under anesthesia, making Vice President Harris the acting president. President Biden sent them each another letter upon the conclusion of the procedure to resume his duties at 11:35 a.m.

"As was the case when President George W. Bush had the same procedure in 2002 and 2007, and following the process set out in the Constitution, President Biden will transfer power to the Vice President for the brief period of time when he is under anesthesia," Psaki said before President Biden's colonoscopy.

On Friday afternoon, President Biden took part in the annual pardoning of the national Thanksgiving turkey.

When President Biden took office he brought O'Connor back to the White House to continue serving as his doctor, and O'Connor led a team of experts in conducting President Biden's physical exam Friday.

Once the COVID-19 pandemic emerged in early 2020, President Biden's team took intense steps to keep the then-candidate and now-president healthy as the virus raged and took a disproportionate toll among older populations. President Biden received his first dose of the COVID-19 vaccine in December 2020 and his second dose just two weeks before taking office. He received a booster dose, which regulators say provides more enduring protection, in late September.

Former President Donald Trump, 75, was sharply criticized for releasing only cursory details on his health while running and serving in the White House, including concealing the seriousness of his COVID-19 illness a month before the 2020 presidential election.