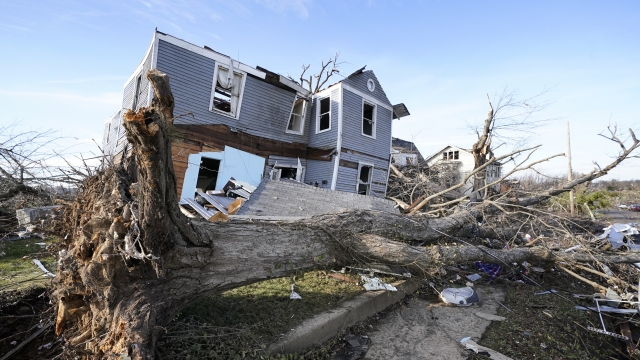 In Mayfield, the power is back, but many spirits remain broken, as residents like Judy Saxton say tornado recovery in Mayfield feels like it's at a standstill...

"You walk outside, and it's right there in your face," Saxton said. "They have done some things, but I don't see the progress."

Saxton's newly discovered half-brother drove cross country to deliver generators after the storm. Today, they're as close as the bark to a tree.

"We've got 67 years to catch up, and every day we talk, we talk for an hour to two hours on the phone," Saxton said.

Images show the power of the storm that derailed over 24 train cars. Almost an hour and a half away in Barnsley six months later, those train cars the tornado tossed like toys have been removed.

Across the tracks, it was a happy ending for the Lutz family.

When the storm charged through Hopkins County, quick-thinking Lutz put the babies in the bathtub with a bible. Then, the storm ripped the roof off and sucked the tub out of the house.

"God had his hand upon them, boys and myself and our praising for that," Lutz said.

Today Lutz has a new house; her precious grand kids are doing better.

"When he hears a train, he's not shaking anymore," Lutz said. "He's not bursting out with tears, crying, and I praise God for that because that ain't nothing I could do. And then Dallas... thank God he's completely healed... He's starting to roll over now. He's starting to eat baby food instead of milk all the time. So, I see a big difference in both of them from then to now."

The church is seen as the cornerstone of many southern communities. First Baptist Mayfield, its pastor and several families faced the storm and survived.

Although it remained standing, the interior of the building was a mess.

"The progress, I would say, has been continual, but the process, it's been slow," Fowler said. "It basically damaged every roof that we have. In some areas, it pulled the roof all the way off, in some areas there were just massive holes. The day of the storm and then weeks after more rain came a lot of rain. Everything inside got soaked."

Between the church and building across the street, First Baptist is now repairing 80,000 square feet of space.

Workers say it will take about a year to rebuild. In the meantime, parishioners are using a local high school for services.

After that nightmare storm ripped off his roof, Jordan Baize went from playing his waterlogged piano with missing keys to playing at a place many can only dream of — The Grand Ole Opry in Nashville.

Six months later, Baize was on the campaign trail running for an elected position in Muhlenberg County. He lost the primary race, but he hasn’t lost hope.

The people of Mayfield say they still live by faith, and they have hope for the future. They just don’t want to end up a distant memory as they continue to recover from this tragedy.