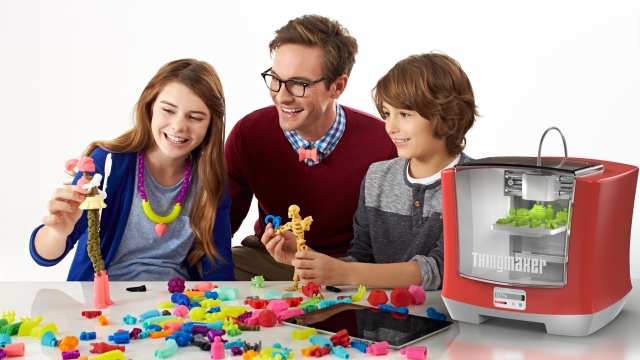 SMS
Check Out The 3-D Printer That Lets Kids Make Their Own Toys
By Ben Lawson
By Ben Lawson
February 16, 2016
Mattel is seeing if 3-D printers are ready for the mainstream with its new product, ThingMaker.
SHOW TRANSCRIPT

Mattel's ThingMaker may be the first 3-D printing device to break into the mainstream market. And it happens to be pretty darn cool.

If the name ThingMaker sounds familiar, that's because it's a revival of a product from the 1960s. Remember the toy that let kids create models of different creatures by pouring liquid plastic into molds?

But Mattel's new ThingMaker takes the brand into the future. It uses an app for mobile devices to let children print their own toys at home. Like we said, pretty awesome.

The app is free, but the printer itself will run $300. Mattel hasn't given any prices for filaments needed to print the toys.

There are other affordable 3-D printers out there, but most require software with a steep learning curve.

In Mattel's case, Toyland says the "ridiculously intuitive" app makes the device easy to use.

Plus, much like the video game "Minecraft," it lets children use technology creatively.

Mattel doesn't have any printouts planned for its more well-known brands, like Barbie or Hot Wheels, but a Mattel spokesman told USA Today that it's a possibility somewhere down the line.

The Thingmaker is available for preorder now on Amazon and is expected to launch sometime in the fall.

This video includes clips from XYZ Printing and images from Mattel.