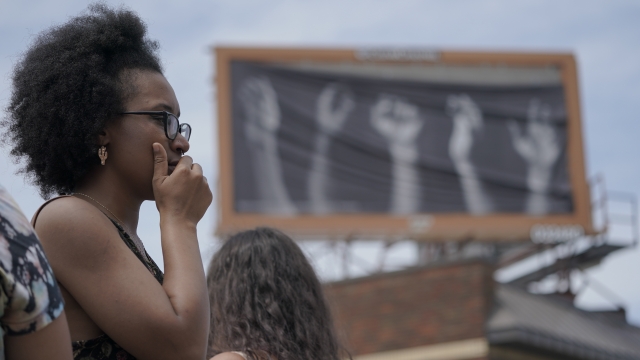 SMS
Derek Chauvin Sentenced To 22.5 Years For George Floyd's Murder
By Associated Press
By Associated Press
June 25, 2021
The sentence was not the 30 years that prosecutors asked for, but it exceeds the 12 and a half years recommended under state guidelines.
SHOW TRANSCRIPT

Former Minneapolis police officer Derek Chauvin was sentenced to 22 and a half years in prison for the murder of George Floyd, whose dying breaths under Chauvin’s knee led to a nationwide outcry and protests against racial injustice.

The sentence fell short of the 30 years that prosecutors had requested,  but it still exceeded the 12 and a half years prescribed under state guidelines. Judge Peter Cahill cited Chauvin's “abuse of a position of trust and authority and also the particular cruelty” of Floyd's killing as reasons for the longer sentence.

Just before it was handed down, Chauvin broke his more than yearlong silence in court to offer condolences to the Floyd family and say he hopes more information coming out will give them "some peace of mind." He did not elaborate. His mother, Carolyn Pawlenty, also appeared in court to plead for mercy for her son, saying his reputation has been unfairly reduced to that of “an aggressive, heartless and uncaring person” and a racist.

“I can tell you that is far from the truth,” she told the judge.

Outside the courthouse, a crowd of about 50 supporters of the Floyd family clasped hands. They were somewhat subdued amid debate about whether the sentence was long enough; Floyd's family had asked that Chauvin serve 40 years.

“We don’t want to see no more slaps on the wrist. We’ve been through that already," said Terrence Floyd, one of George Floyd's brothers.

Still, other family members, attorneys and other advocates acknowledged that the prison sentence was a victory in the fight for police accountability.

“Let us not feel that we’re here to celebrate,” said civil rights leader the Rev. Al Sharpton. “Justice would have been George Floyd never having been killed.”

With good behavior, 45-year-old Chauvin could be paroled after serving two-thirds of his sentence, or about 15 years.

The three other officers involved in Floyd's death are scheduled for trial in March on state charges of aiding and abetting both murder and manslaughter. They will also stand trial with Chauvin on federal civil rights charges. No date has been set for that trial.