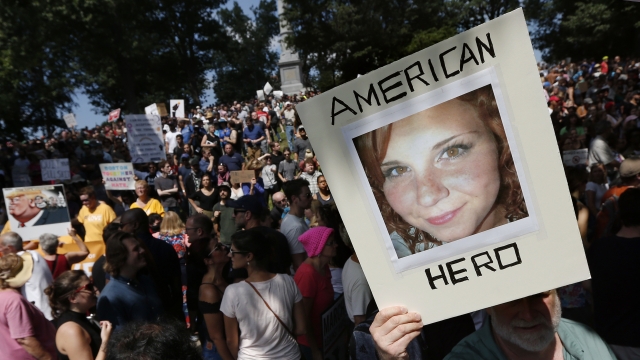 Kendall King was a student at the University of Virginia when the violent "Unite the Right" rally took over Charlottesville, Virginia.

"I remember being shocked on the night of August 11 as to how many of them were marching with the torches. And I remember being terrified," King said. "I remember trying as much as possible just to stay grounded with my friends and stay touching them. So I at least knew that i was holding on to people who I could trust."

King says she had been organizing and protesting with her classmates all summer across the state but still wasn't quite prepared for what she would face that weekend.

"Biggest memory is watching the wave of Neo-Nazis flood over the top of the rotunda and down the steps towards us. And feeling for a moment in my mind, should we stay here? And looking around to everyone and everyone was like, yes, we are staying here," she said.

Don Gathers was at First Baptist Church the morning of August 12, 2017.

"There was a heavy presence of fear. But the sanctuary was also filled with hope," Gathers said.

He says the community worked together that day to beat back hate, before tragedy struck.

"She had her life taken from her just for being out participating with us and saying no racism is wrong," he said.

Heather Heyer was killed and dozens were injured when James Fields used his car as a weapon and drove into a crowd of peaceful protesters.

Fields was ultimately given two life sentences for the attack.

For many who directly clashed with demonstrators that weekend, there were lasting effects. Kendall King took time off from school.

"I had a lot of trouble sleeping in the aftermath of everything, and my grades were slipping. I wasn't doing well in school," King said.

She later went back and graduated from university. Now, she focuses her energy on educating the public about the night of the 11th as well as shed light on other student activism on campus throughout history.

As part of that effort, King and a group of UVA students and staff collected artifacts from the rally in the days afterward.

Baseball caps, gas canisters and other items from the rally are now on display at the University of Virginia library. The exhibit is called the "Summer of Hate."

"It's been something that's been honestly a good thing to return to, to remind myself that this work is ongoing, that it will be a lifetime of working towards a better world with each other. And so as traumatic and horrible and awful as it is, it's also a good time to feel extra grounded in my community and a good time to check in with everybody," King said.

Just like 5 years ago, gathers spoke to the Charlottesville community at First Baptist Church on Friday.

He called for the community to honor Heather Heyer's memory and never forget what happened that weekend.