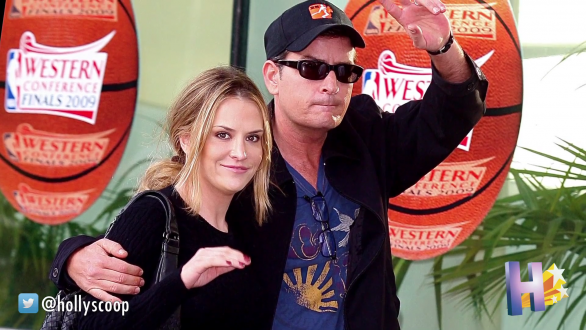 Is it 2011 again? Sure seems like it — because Charlie Sheen is calling Brooke Mueller a whore.

Ever since the couple split back in 2011, they've been engaged in a bitter custody battle over their 4-year-old twin boys, Bob and Max. Charlie's repeatedly accused Brooke of putting the boys in danger with her alleged drug abuse. (Via E!)

The latest drama started when Charlie slammed both his ex-wife and child protective services via Twitter last week, calling child services officers "doosh bags" who have done nothing to protect the twins from Brooke, who he called "an evil and uber loser" and a "whore."

And he didn't stop there. A few days later, the actor went on a rant on TMZ.

"She's one of the most incompetent losers I've ever encountered ever."

As you can imagine, Brooke wasn't too happy with Charlie's fighting words.

She claims Charlie violated the divorce settlement they agreed to back in 2010 by blabbing to TMZ. He promised not to talk to the media about Brooke's alleged drug use — and he definitely mentioned it.

Charlie said he wasn't sure if Brooke is back on drugs again, but said she's "as awful a parent and a person as you can possibly draw up." (Via YouTube / miptalk)

But when Brooke tried to get a restraining order against him last week, she failed. And Charlie wasn't shy about expressing his happiness online.

He posted this pic of a slice of cake with a plastic grenade on top alongside a couple of nasty messages, including, "...nice try this morning, Brooke. You are a chubby weirdo who will lose at every turn." (Via Twitter / @CharlieSheen)

And he's showing no signs of retracting the claws. Sheen went BACK to TMZ Wednesday to announce he's declaring war on Brooke.

Even quoting his own father, Martin Sheen, in "Apolocolypse Now" to make his point. "I am beyond their timid lying morality, therefore I am beyond caring." (Via Zoetrope Studios / "Apocolypse Now")

And as for the kids, who all this drama is apparently in the name of, they're currently with Charlie's other ex-wife Denise Richards, who has temporary guardianship.