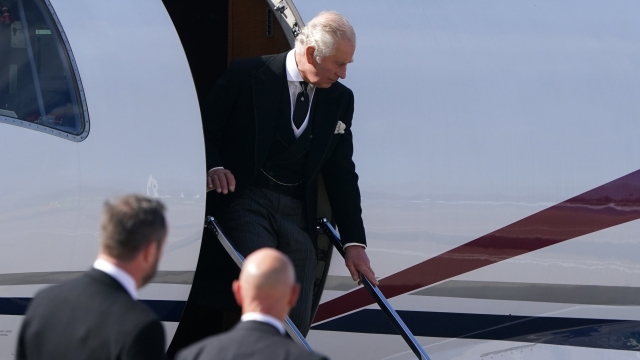 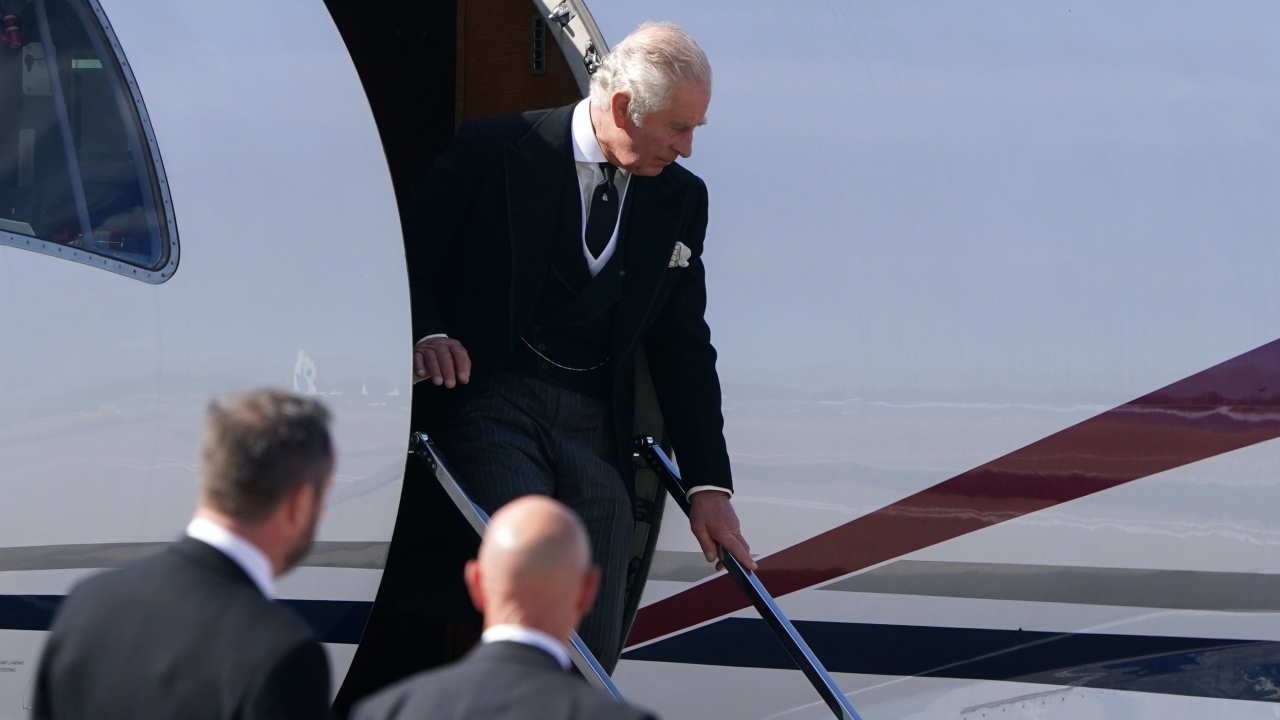 King Charles III landed in Edinburgh on Monday to accompany his late mother's coffin on an emotion-charged procession through the historic heart of the Scottish capital to a cathedral where it will lie for 24 hours to allow the public to pay their last respects.

Charles flew to Scotland after earlier receiving condolences at Parliament and telling lawmakers he would follow his late mother's example of "selfless duty."

Earlier, Queen Elizabeth II's grandson Prince Harry hailed her as a "guiding compass" and praised her "unwavering grace and dignity."

The government, meanwhile, announced that the nation will observe a minute of silence on Sunday, the evening before the queen's funeral. The "moment of reflection" will take place at 8 p.m. People were encouraged to mark the silence at home or at community events.

Hundreds of lawmakers crowded into the 1,000-year-old Westminster Hall at the Houses of Parliament for the service, rich in pageantry, in which Parliament offered its condolences to the king, and he replied.

A trumpet fanfare greeted the king and his wife Camilla, the queen consort, as they entered the hall, which was packed with hundreds of legislators.

Charles told members of the House of Commons and House of Lords that he would follow his late mother Queen Elizabeth II in upholding "the precious principles of constitutional governance" that underpin the U.K.'s political system.

He paid tribute to his mother, saying: "As Shakespeare said of the earlier Queen Elizabeth, she was a pattern to all princes living."

The hall, with its magnificent hammer-beam roof, is the oldest part of the parliamentary complex — a remnant of the medieval Palace of Westminster that once stood on the site.

"As I stand before you today, I cannot help but feel the weight of history which surrounds us and which reminds us of the vital parliamentary traditions to which members of both Houses dedicate yourselves, with such personal commitment for the betterment of us all," Charles said.

The ceremony was held in Westminster Hall because monarchs are not allowed inside the House of Commons. That rule dates from the 17th century, when King Charles I tried to enter and arrest lawmakers. That confrontation between crown and Parliament led to a civil war which ended with the king being beheaded in 1649. 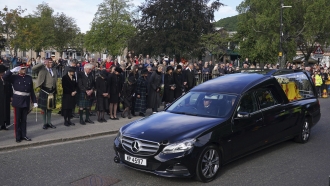 Earlier Monday, a personal statement posted on Harry and his wife Meghan's Archwell website said he cherished their times together "from my earliest childhood memories with you, to meeting you for the first time as my Commander-in-Chief, to the first moment you met my darling wife and hugged your beloved greatgrandchildren."

Amid acrimony in the House of Windsor, Harry quit as a senior royal and moved to the U.S. two years ago. On Saturday, there was a possible sign of a reconciliation as Harry and Meghan joined his brother Prince William and sister-in-law Catherine in meeting mourners outside Windsor Castle.

The national outpouring of grief continued Sunday as thousands of people lined streets and roadsides as the oak coffin was borne from the late queen's beloved Balmoral Castle summer retreat, where she died on Thursday, to Edinburgh.

In Edinburgh, the king will walk behind his mother's coffin as it is slowly transported from Holyroodhouse to St. Giles' Cathedral, where the crown of Scotland will be placed on the coffin ahead of a service of prayer and reflection on the life and 70-year reign of the widely cherished monarch.

The queen's coffin will lie at the cathedral for 24 hours, giving members of the public a chance to file past and pay their respects. On Tuesday, it will be flown to London where the coffin will lie in state at the Houses of Parliament Palace from Wednesday afternoon until the morning of the funeral on Sept. 19.

Authorities already have issued rules and guidelines for people wanting to pay their respects in London, with a long queue expected.

After visiting Scotland, Charles embarks on a tour of the other nations that make up the United Kingdom — he visits the Northern Ireland capital, Belfast, on Tuesday and Wales on Friday.

Harry's statement ended on a poignant note alluding to the death last year of his grandfather, Prince Philip, saying that "We, too, smile knowing that you and grandpa are reunited now, and both together in peace."