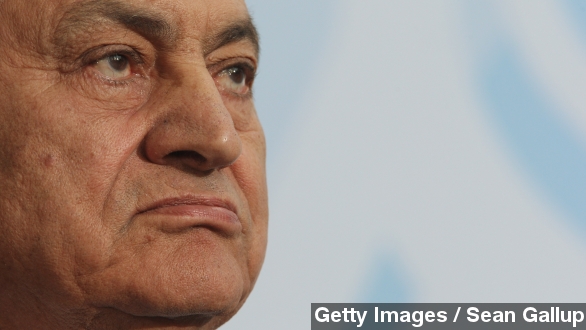 SMS
Charges Dropped Against Mubarak Over 2011 Protests Deaths
By Jasmine Bailey
By Jasmine Bailey
November 29, 2014
An Egyptian court ruled Saturday murder charges against ex-president Hosni Mubarak, his sons and other aides will be dropped.
SHOW TRANSCRIPT

They included claims the 86-year-old, who served as president for three decades, was responsible for the deaths of hundreds of protesters during the 2011 uprising that led to the fall of his regime. (Video via MSNBC)

"The court dismisses criminal charges against Muhammad Hosni Mubarak in connection with the killing of protestors in 2011," said Judge Mahmoud Kamel al-Rashidi on BBC.

This was the scene inside the court room as onlookers burst into applause. Outside the courtroom supporters of the ousted president also cheered in support. (Video via CNN)

Mubarak's two sons and seven other defendants were also acquitted as the court dismissed the cases ruling it did not have jurisdiction.

Egyptian outlet Aswat Masriya reports during the trial Mubarak testified on his own behalf, saying, "Mubarak, who stands in front of you, would never order the killing of protesters ... or any Egyptian under any conditions."

The court outlined its decision in a 1,400-page document explaining it could not be proved that Mubarack directly ordered the deaths. It also explains the decision to drop lighter charges.

If the charges would have stuck Mubarak could have had to serve a life sentence — an outcome many believe should have been reality. (Video via Al Jazeera)

Those who didn't agree with the verdict reacted in shock as some 800 people protesting against Mubarak were killed. The Guardian talked to one protester who helped lead the 2011 movement.

“It’s very depressing. ... I saw the blood of the people who died in January 2011, and I carried some of them myself. What a shame for the judicial system, what a shame for Egypt as a state. But this wasn’t unexpected. The Mubarak era still hasn’t fallen. It hasn’t stopped killing – so why would they say Mubarak is guilty when they’re doing the same thing.”

He was referencing the country's counter-revolution under its now president Abdel Fattah al-Sisi. Under him hundreds of members and supporters of the Muslim Brotherhood have been sentenced to death.

Now, although this trial is over, an analyst for Sky News explains there's still a chance the embattled ex-president could be indicted. The court's ruling will likely be appealed by the prosecutor.

"He has two rights of appeal, he's already used one so this would be the last time he can appeal. ... But it does seem for now that Hosni Mubarak, his sons and top aides have been cleared," Sherine Tadros said.

Currently Mubarak is serving a three-year sentence at a military hospital for charges of stealing public funds. His sons are serving four years for the same crime. Mubarak is expected to be released next year.