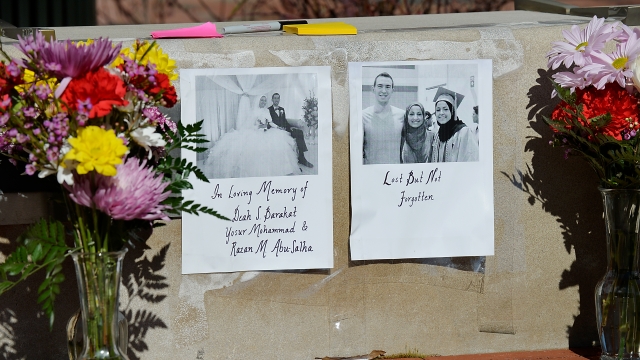 It's been five years since three American Muslim university students in North Carolina were killed in what their families have described as a hate crime. The murders not only shook Muslim communities in the U.S. but across the world.

On Feb. 10, 2015, 23-year-old Deah Barakat, 21-year-old Yusor Abu-Salha and her 19-year-old sister, Razan Abu-Salha, were murdered in their Chapel Hill home by their neighbor, Craig Hicks.

Hicks reportedly told authorities he was provoked by a dispute over parking. But the victims' families and prosecutors alleged he had a history of aggressive behavior toward minorities and a hatred of religion. In June 2019, Hicks pleaded guilty to the murders and was sentenced to three consecutive life terms without the possibility of parole.

"Deah, Yusor and Razan died because they were Muslim," said Barakat's older sister, Suzanne Barakat. "Do you know how insulting, hurtful, demeaning and traumatizing it is to take the words of the murderer, who turned himself in smiling, as the official version of events and call it a 'parking dispute'?"

The killings inspired the founding of the Our Three Winners Foundation. The nonprofit works to disrupt what it calls the "increasingly demonizing rhetoric toward American Muslims and marginalized groups." Oussama Mezoui, the organization's board director, called the three victims "ideal citizens" who wanted to make a positive impact on the wider world.

On Instagram, the families of the victims remarked on the anniversary of killings, saying: "Nothing makes the pain of losing these beautiful souls easier. Each passing year, we are reminded of the very real consequences of hate."