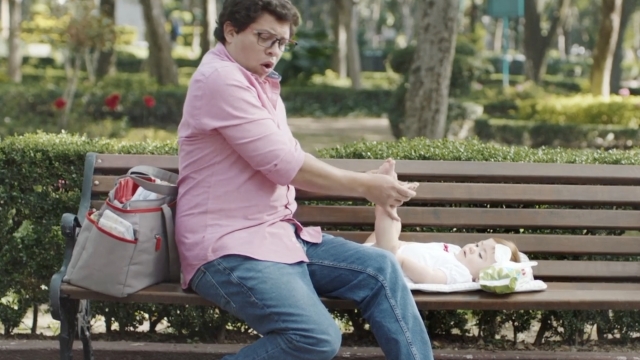 Baby changing tables in public restrooms have a story to tell — about us. Where they've been installed or not installed tracks with evolving family dynamics and gender roles — especially the role of dads. First of all, changing a diaper is not the most pleasant part of parenting, but it can be a special bonding opportunity. Plus, it's just fair to split up dirty jobs.

But public facilities don't always facilitate a fair division of duty. The ancestor of the public baby changing table is the public diaper-changing room. They opened on New York's Jones Beach in 1929, the brainchild of urban planner Robert Moses. Over the next few decades, changing a kiddo while on the go became a necessity and a little more convenient, at least for some.

Things were changing. More mothers went to work outside the home. Child care got pricier. Parents started taking their kids on errands, to restaurants, to airports. More and more parents slowly worked toward parity in child care, especially later in the 20th century.

Fathers spent an average of eight hours a week on child care in 2016, about three times higher than in 1965, according to Pew Research. (Eight hours, by the way, was still shy of the average of 14 hours moms spent caring for kids.)

These societal shifts created demand for more convenient changing options. The revolutionary response: fold-down changing tables found on walls in many — granted, not all — restrooms. You can thank a Minneapolis father and his friends.

They came up with the idea in the mid-'80s and called their model the Koala Bear Kare Baby Changing Station. The table became more and more common throughout the 1990s — originally in women's restrooms, but, thanks to lobbying efforts, increasingly hanging on the walls in men's rooms, which is especially helpful to same-sex male parents, families with working moms or single dads.

Policymakers are taking note (many of them are moms and dads). A law in New York requires changing tables in new and renovated buildings. And in 2016, the BABIES Act mandated tables in women's and men's restrooms in all federal buildings.

Perfect parity hasn't been reached just yet, at home or in bathrooms. But at least today, thousands — make that millions — of couples can now squabble about whose turn it is to change the baby at the playground or restaurant.

Considering the past, go get 'em guys, it's probably our turn.