The Future Of U.S. Levees Involves A Lot Of Hard Decisions 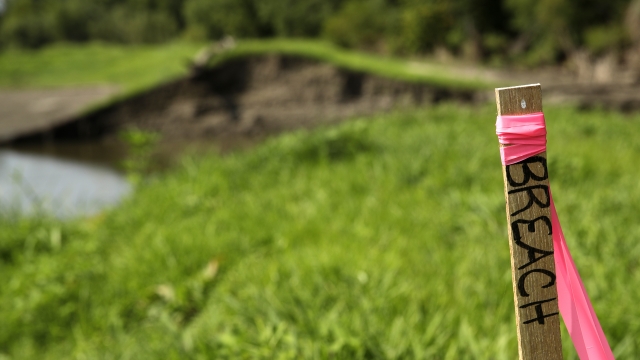 After a century of building the U.S. levee system, we're facing a tough reality: It wasn't built to protect us from the effects of climate change.

The U.S. levee system is a massive — and, often, not fully understood — piece of infrastructure. Even the Army Corps of Engineers admits the condition of more than half of the mileage of levees in the U.S. is "unknown" because they're outside the federal portfolio.

Some experts argue the levee system was flawed to begin with. And now, climate change has moved the goalposts. What was considered adequate protection when levees were originally built can't withstand wet seasons that are now more common and more severe.

"The swings are getting more and more severe," says J. David Rogers with the Missouri University of Science and Technology. "So that's a big, big problem that is going to just grow, and the biggest issue we're having with it right now is who's going to pay for this stuff."

The people we spoke to for this story all said devastating floods costing at least hundreds of millions of dollars each seem to be the new normal. All of this means hard decisions will be necessary. Significant change and progress in the levee system will require more protection and better risk management.

"We literally get some of these [levees] repaired and we come back into them a year or two later, and they're being damaged again," says Jud Kneuvean, chief of emergency management with the Army Corps of Engineers Kansas City District.

On protection, the Army Corps of Engineers estimates as much as $38 billion is necessary to address current risks. And that's just for levees in the federal portfolio. Upgrading the entire system to account for the realities of climate change would undoubtedly cost far more.

"It's hard to swallow for some folks that there are probably some of these legacy systems, the cost to repair them is probably the cheapest alternative going forward," says Kneuvean. "And then other cases, it's probably not the right thing to do."

And we've learned the hard way no levee is fail-proof. Following Hurricane Katrina in 2005, officials began acknowledging risk management must be a bigger part of the flood policy discussion.

That's a difficult conversation when Americans spent the past century developing more and more in the floodplain. How can we better protect the people and property behind levees? Should those residents, businesses and public infrastructure even be there in the first place? And who gets the limited pool of dollars available?

"And boy, that's when it gets into politics," says Rogers.

None of these scenarios would play out quickly or is even all that likely to happen. It would take political will from Congress, a lot of money and picking winners and losers.

Until then, though, the people who live and work near levees will remain at risk and Americans will continue seeing repair bills in the hundreds of millions or billions of dollars.