Changes Found In Brain After One Dose Of Antidepressants 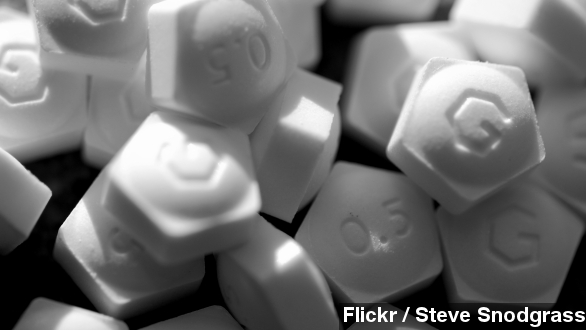 SMS
Changes Found In Brain After One Dose Of Antidepressants

By Madison Burke
September 19, 2014
A study suggest antidepressants can kick in much sooner than previously thought.
SHOW TRANSCRIPT

You might just need one of these to treat depression...

...at least according to a new study published in the journal Current Biology.

The researchers scanned the brains of 22 healthy people who had never taken antidepressants and randomly chose some to take an SSRI — a selective serotonin reuptake inhibitor.

SSRIs boost the mood of someone suffering from depression by changing the balance of serotonin in the brain.

Just hours after the participants were given the medication their brains were scanned again, and researchers found a dramatic change had already occurred in the brain's connectivity.

This is big news. Before this discovery, researchers thought it could take days, weeks, even months for antidepressants to kick in.

“We were not expecting the SSRI to have such a prominent effect on such a short time-scale and the resulting signal to encompass the entire brain.”

Researchers are saying they hope these findings will eventually help them predict who would benefit the most from antidepressant medication.

But there are some holes in this study. For one, they focused only on healthy patients, instead of people currently suffering from depression.

People with depression have brains that are chemically different from someone who is healthy, so it's possible they would react differently if given a drug.

Also, the study does not touch on how effective taking a single dose will be. Most antidepressants require time to build up in the body to take full effect.

Although the brain scan showed changes quickly, we don't know if it would actually make people feel better.

The authors of the study do say they plan to continue researching the topic.