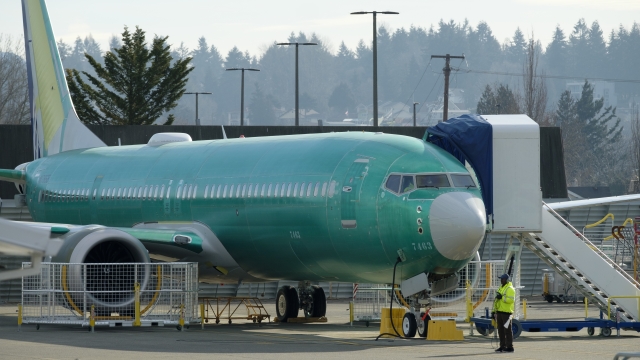 SMS
Boeing Says It May Have To Slow Or Stop 737 Max Production
By Alec Larson
By Alec Larson
July 24, 2019
​Boeing's CEO said slowing or halting production is "not something we want to do, but an alternative that we have to prepare for."
SHOW TRANSCRIPT

On Wednesday, Boeing's CEO said the aerospace company may have to further slow down, or even temporarily halt, production on its 737 Max aircraft.

In a conference call with investors, CEO Dennis Muilenburg said that while Boeing hopes to get the 737 Max back in the sky early in the fourth quarter, any further delays to getting the plane approved could jeopardize its production.

That's led the company to start preparing for a scenario in which it will have to reduce or stop production. Muilenburg said that's "not something we want to do, but an alternative that we have to prepare for."

Boeing's 737 Max has been grounded worldwide since March after two deadly crashes involving the aircraft occurred within months of each other. The combined crashes killed more than 300 people.

The groundings have led to Boeing's largest reported loss ever — a second quarter adjusted loss of nearly $3.7 billion. It's not clear when the 737 Max will be authorized to return to service.