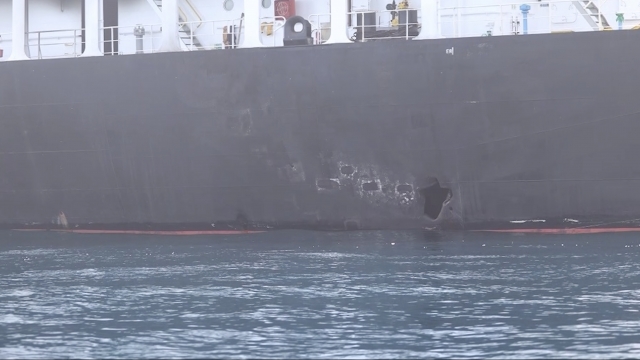 Trump administration officials say the proof Iran attacked foreign ships is there.  They're sure of the intelligence. Late Monday afternoon, Central Command released 11 new images showing the aftermath of the ship bombings. The images show a large hole in the side of one of the vessels as well as bomb materials. The images come in the face of European skepticism about U.S. intelligence's conclusions.

Germany had been asking for more concrete evidence, saying the previously released black and white, 1-minute 39-second grainy video is "not enough." Japan Today reported over the weekend that "government officials remain unconvinced," adding, "The U.S. explanation has not helped us go beyond speculation."

The U.K. and Saudi Arabia agree with U.S. intelligence. The United Nations is warning against a new confrontation. There are hawks within the Trump administration who have, in the past, pushed for a confrontation with Iran. Among them, national security adviser John Bolton, who pushed for the ending of the Iran nuclear deal. In May, the Trump administration reimposed oil sanctions on the country. Since then, the U.S. relationship with Iran has been worsening rapidly. Some are pointing out potential parallels with the lead-up to war with Iraq. Bolton is dubbed an "architect" of the war in Iraq. With no permanent secretary of defense or U.N. ambassador, it's possible Bolton has a more prominent role, worrying some stateside.

"There's no question that Iran has a pattern of malign activities. There's also no question that there is a pattern that is disturbingly reminiscent of the run-up to the war in Iraq, in some cases being driven by the same people," said Democratic candidate for president Pete Buttigieg.

Others, like Republican Sen. Tom Cotton, who pushed to withdraw from the Iran deal, say the president should take more action.

As the U.S. weighs options, the situation appears to be escalating. Iranian-backed rebels in Yemen are said to be targeting American drones. Iran says it plans to exceed limits on its uranium material stockpile in 10 days, and Iranian officials said they dismantled a U.S. cyber espionage network and, according to Reuters, arrested "several U.S. spies" around the world.