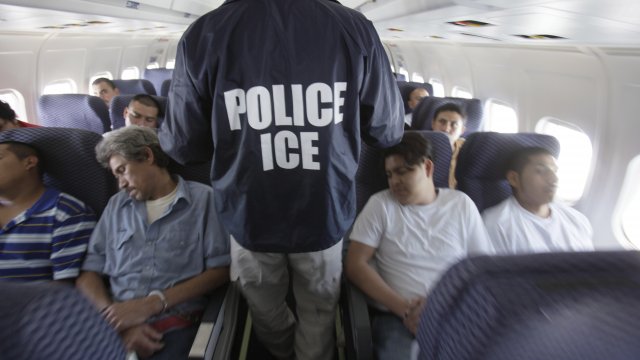 Most Latin American countries have closed their borders to prevent the spread of the coronavirus. But deportation flights from the U.S. continue to arrive in Guatemala, Honduras and El Salvador.

Experts worry the flights could export the virus to these poor and ill-prepared Central American countries.

"Think about it: In the detention centers before they deport people, people are crowded together often in big rooms with bunk beds," said Adam Isacson, director for defense oversight at the Washington Office on Latin America.

"After that they're put on aircrafts, which are very enclosed spaces with recirculated air. And then they drop them in countries with some of the weakest public health systems in the hemisphere. This is super dangerous," he added.

Guatemala says two returned citizens have tested positive after the U.S. deported them. Guatemalan officials suspect the deportees contracted the virus while in ICE custody.

By Monday, the three Northern Triangle countries had over 400 confirmed cases combined.

"If one flight has two cases, that increases the overall percentage in that country by quite a bit. The countries have very few ventilators or ICU beds. So even just a small increase in cases could be catastrophic," Isacson said.

ICE told Newsy that prior to boarding, the Guatemalan men who later tested positive "neither had a temperature nor presented symptoms." The agency says it screens all detainees for fever and other symptoms before removal flights. Those with symptoms are "denied boarding." But advocates say that's not enough.

"They are not testing people, they are just taking their temperatures. If that were enough, you could just take your temperature right now before you went to a bar or restaurant and you'd be fine, it's not enough," Isacson said.

The Guatemalan government has asked the Trump administration to halt deportation flights "during this crisis." But for now, the U.S. continues to fly deportees back to Central America. Separately, ICE has been bringing home hundreds of stranded Americans on the return legs of removal flights.

"In the middle of the flight, they told us that the plane was used to take deportees to El Salvador," said Yolanda Chaale, an American citizen who was stranded in El Salvador and flew home on an ICE Air charter flight.

"We had just been getting more and more nervous given she has Type 2 diabetes and history of heart issues, among other things,"said Sophia Chaale, Yolanda's daughter.

Sophia Chaale is grateful to the U.S. government for bringing her mother home. But she says the fact that the U.S. is using deportation flights to bring citizens home is concerning. ICE told Newsy that its "employees remove passenger trash" prior to boarding stranded citizens.

"What was the process of actually cleaning the plane, where they tested? I guess now that I think about it because you know the medical care received, you see reports from the immigrants in immigration detention camps, it's terrible," said Sophia Chaale.

"But anyway, I'm glad that I'm here with my kids," said Yolanda Chaale.

"And her grandkids!" added Sophia Chaale