How The Census Is Tackling Potential Miscounts — And Why It Matters 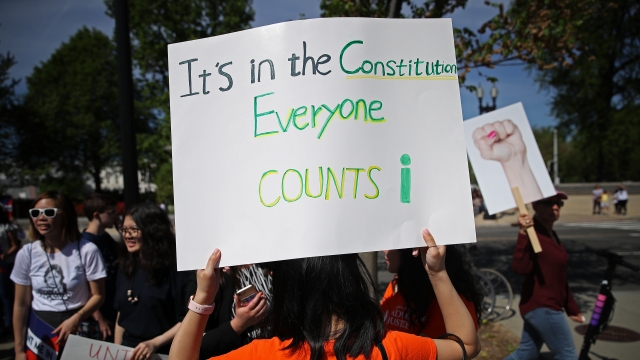 SMS
How The Census Is Tackling Potential Miscounts — And Why It Matters
By Lauren Magarino
By Lauren Magarino
July 11, 2019
The Census Bureau says its primary goal "is to count everyone once, only once, and in the right place." That's easier said than done.
SHOW TRANSCRIPT

When it comes to the 2020 census, we've been hearing a lot about this question.

"They're asking everything except are you a citizen of the United States, how ridiculous is that?" President Trump said.

It's a question that's gotten the attention of lawmakers ...

"I am supportive of having the citizenship question on the census," U.S. Sen. John Barrasso said.

"It's to undercount Latinos so that they can create congressional districts which will not be Democratic," U.S. Sen. Bernie Sanders said.

As well as the Trump administration ...

"We've been considering all the options, and I've been in constant discussions with the president ever since the Supreme Court decision came down," U.S. Attorney General William Barr said.

And the courts, leading to a decision from the high court itself.

Washington's focus is on this question. But the U.S. Census Bureau is dealing with more issues. All of them boil down to potential miscounts.

Before we get into how that may happen, let's talk about why an accurate count matters and how a miscount affects you.

The census is used to help make three big decisions: how House seats should be divided among all 50 states, whether to adjust the Electoral College, and how federal funding should be distributed.

That last one could include, among lots of other things, funding for Medicaid, education and food stamps.

In a report on the 2020 census, the Census Bureau said about $675 billion in federal funding is distributed each year based on the survey's data.

If census numbers aren't accurate, it can cost communities money and voting power.

An Urban Institute report on the 2020 census found that in "high-risk" scenarios, the entire U.S. population could undercounted by as much as 1.22%.

At the state level, California has the greatest risk of being undercounted just because of the sheer size of its population. Texas, New Mexico, Florida and Georgia face the same problem.

And on the individual level, the report found that in the high-risk case, "Black and Hispanic/Latinx-identified individuals ... could be undercounted nationally by 3.68 percent and 3.57 percent, respectively."

And these are just potential errors involving undercounting. The issue can also swing the other way.

According to the report, non-Hispanic/Latinx white individuals could be overcounted nationally by as much as 0.03% in the high-risk scenario.

Illinois is one state that has been — and still is — severely affected by miscounts. That's mostly because a large portion of its population is part of what the Census Bureau deems as "hard to count" tracts.

The Chicago Urban League released a report on this issue that said, in part: "Illinois' Black residents are among the hardest to count, with nearly 42% living in Hard to Count census tracts. About 33% of Latinx residents and nearly 20% of children under age five also live in Hard to Count areas."

These percentages account for more than 1.67 million Illinois residents.

The Urban League report found if even 1% of the population is undercounted, it could result in the loss of $122 million per year in Medicaid funding.

So far, the Census Bureau says it has a plan to tackle the risk of miscounting.

One of its solutions is using technology to fill in the gaps: 2020 will be the first time people will be able to respond to the census online.

But critics argue that may bolster communities that are already accounted for and "present new barriers" for those without internet access.

The Bureau is also leaning on state and local community groups called Complete Count Committees, or CCCs. According to a guide on these committees, they're meant to "motivate residents to respond to the census."

But The Washington Post reports "only 32 states and the District of Columbia" have a CCC. That's at least partly due to the challenges of finding workers and a lack of funding for these committees.

It may not be enough manpower to rally Americans to participate in the test survey, especially when immigrant advocates say one question could make many residents, documented or undocumented, afraid to respond.

That's something that may get in the way of the Census Bureau's primary goal: "to count everyone once, only once, and in the right place."